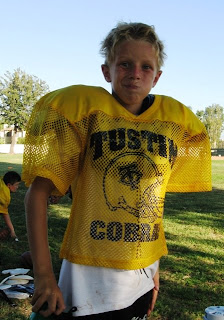 I know that we are blessed to have Jenelle, but there are many times I feel doubly blessed because of Jack. Really, we have two very different experiences with our kids; one typical and one with very challenging needs. We get to experience both sides of the coin, and always I worry whether or not Jack realizes how his childhood is so different compared to other typical families.

Jack is 7, and it has been such a fun age. He's gaining confidence and he's so inquisitive. Jack was almost 3 when Jenelle's medical issues became a priority. While at times it hurt to hear him ask, "Why can't she play with me?" there were other times where I was thankful for his innocence. When he was younger, we used to explain that "Jenelle has a broken brain", and that the doctors were trying to fix it. He was satisfied with that explanation, and seems to have gone on about his life almost as if he were an only child at times.

As he is getting older, I've noticed the old "broken brain" excuse is getting tougher to sell. It may have started with our involvement with Challenger Little League earlier this year. I think that experience was his first introduction to the fact that there are other kids like Jenelle. Since Challenger League, he has said some things lately to make me realize that he is finally understanding how Jenelle is so different.

When our dear friend Mollie passed in June, I sat down with Jack and told him what had happened and why Mommy and Daddy were so sad. This was my first attempt at explaining the real world to Jack, without really trying to pass off the "broken brain" excuse. Though he had never met Mollie, he know all about her from our friend Jim (Mollie's Uncle.) He knew she had many surgeries, and he knew she was similar to Jenelle.

Recently, when Jenelle had her abscess tooth, I took Jack with me to Jenelle's doctor's appointment. Jack sat attentively and listened to the doctor and I discuss Jenelle's tooth. On the way out to the car, Jack suddenly asked, "Mommy, will Jenelle need surgery?" Knowing he had just listened to the conversation I replied, "We don't know, but yes, it's a possibility." Then he asked, "Mommy, if Jenelle has surgery, will she die?" My heart stopped a moment, and I realized he was making the connection to our friend Mollie. Mollie died after slipping into a coma during surgery. I reassured him that was not a possibility with Jenelle's tooth.

Sometimes I worry that he is far too experienced for his age. Later that night, we talked about life with Jenelle. I asked Jack if he knew our home was different, and he said yes. He realizes that his younger sister is not like other kids, and he simply said, "Jenelle is different, and she has a broken brain" almost verbatim from what we've always told him. And after repeating that mantra, he looked at me and said, "Mom, when are the doctors going to fix her broken brain?" In the past I always responded that we were working on it and the doctors were trying to help Jenelle. Realizing now that our innocent excuses are too childish for him now, I answered honestly; "Jack, it may never be fixed. Jenelle may always be like she is. A little different from others and always improving." He simply replied, "Oh", and seemed content.

Simple answers about Jenelle aren't easy. As Jack grows up, he deserves to become fully aware of of how she is different, and sometimes those answers need to be truthful. While at times his keen understanding of the special circumstances surrounding life with Jenelle are heart wrenching, at least it is honest. I realize the need now to share more detailed information with him about Jenelle's real issues. While it is a common phrase to apply to special needs kids, it applies to typical ones as well; kids are resilient.

Jack makes me so proud in the ways he loves his sister. He respects her disability, and it doesn't stop him from thinking life is different in any way. In the end, he will be better because of it.

Yes, he will be better because of it. What a beautiful post. Thank you for sharing this.

In addition to all the fears and worries I have about my daughter and her epilepsy, there are also the concerns of how it is affecting our son. He's only 4 right now. He knows that Emma has a boo-boo on her brain. Other than that, I don't think he realizes much.

But he goes with me every week to PT and to the neurologist. He sees the other kids with various neurological problems. He stares like most kids his age do. I try and explain that they just need some extra help, like Emma does. He's a smart little boy and one of these days he's going to put it all together. I'm just hoping it's not too soon.

Thank you for sharing and making me feel a little less alone in that area.

What a well written post and a beautiful testament to Jack. Disabilities really do affect the whole family & not just the individual. It does get harder to explain as they get older, but not quite old enough to get to the real nitty-gritty details. We have the same issues with cousins realizing how different MM is. Thanks for your honesty and sharing this as it will help me the next time.

One of your best posts. And what a great picture to go with it. Excellent

Oh this one hits my heart. AJ (3) has been to most of Becca's appointments, tests, and stays. I know those experiences will make up part of the man he will become - in a good way.

My dilemma is that Becca is 7 now too. She may be missing now 1/4 of her brain, but she is like most 7 yo's and understands her appointments, conditions, and all the discussions with specialists.

At mass last month, she asked me why God made her hemiplegic. Because, "God makes everyone special and for a reason," she said. She often asks me the whys of her shunt and seizures and meds.

Seven is a fun age indeed, but one that is challenging me in ways that hurt my very soul at times. I do my best to give her the tools to cope and rise.

God Bless Jack. He will be a better man for it all, indeed.

Becca's carepage is titled Becca2001 if you'd like to list her as a friend - we'd be honored.