Our visit with Genetics

We made the trip up to UCLA yesterday to have Jenelle seen by the Genetics Department. Our first consultation was great, and much better than I anticipated. We spent over an hour just giving information about our medical and family history. Jenelle was quite the charmer as usual, and they all agreed she was very cute. (I’m biased of course!)

They took some blood and will be testing her thyroid levels and for a genetic disorder called Rhett’s Syndrome. From my own research on the Internet, I found that Rhett’s Syndrome is caused by a genetic mutation error that typically affects only girls who begin to develop normally but then suddenly regress to the point of losing skills such as walking, talking and eating. Some of the typical characteristics of a girl with Rhett’s are one with attractive features, uncontrolled seizures, and they do not use their hands. Jenelle does not fit the profile of the “typical” girl with Rhett’s Syndrome, but they are finding as they test more kids like Jenelle that there is a type of “atypical” form of Rhett’s that would fit Jenelle’s characteristics. It is something we have suspected for a while, but never actually tested. We will have those results in 4 weeks. We go back on Thursday to see Dr. Shields for a routine follow up and should have the thyroid results at that time. If the test for Rhett's is negative, we may consider getting a muscle biopsy to rule out mitochondrial disease.


I’ll update again once we have some test results. Thanks for the continued prayers and positive thoughts!
Posted by Kelly 5 comments:

We had a birthday party for Jenelle's big brother Jack today. As the party was getting started, I was in the kitchen mixing the salad when I looked across the room to see this... 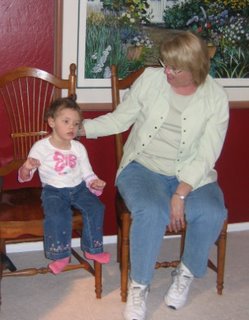 I almost didn't recognize my own daughter!

Grandma had Jenelle "sitting pretty" like a big girl in the chair. She held herself like this for quite a while. Amazing! She has come so far.

Also, please keep Jenelle's Nana (my Mom) in your prayers and positive thoughts. She was admitted to the hospital this evening with pneumonia. They live 4 hours away, and we have our appointments at UCLA this week, so I don't think I can make the trip. She is usually very healthy, so I'm sure she'll be OK. Thanks so much! 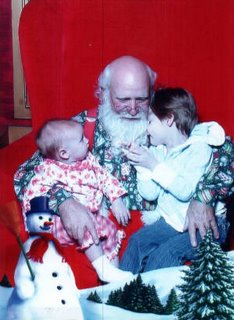 From time to time many of you often ask me about Lily. I stole the photo above from Lily's website - it is Lily and her little sister Andi with Santa. This photo totally warms my heart.

When I look back at the difficult year we had with Jenelle last year, our struggles in no way compare to the difficult year Lily's family had with her. Next Tuesday will be the first anniversary of Lily's brain surgery - a surgery that did little to stop Lily's big seizures. Proving once again that Epilepsy is a monster and that is does horrible things to our children.

Like Jenelle, Lily was enjoying a brief period without seizures due to starting a new drug Vigabatrin. Unfortunately, shortly before Christmas, Lily's seizures returned with a vengeance. I always compare Jenelle and Lily because they look like they could be sisters. With the return of her seizures, it just reminds me that Epilepsy is a very real thing, and our respite right now from seizures could end at any moment. I am always impressed and amazed at Lily's parents - how they are so strong, but I guess I'm strong too, and it is something you just have to be for your child.

Lily's mom Kim posted an update yesterday on her personal blog about the upcoming anniversary of Lily's brain surgery. It was so touching, and I could feel every emotion right along with her. I thought I'd link to it here and share it with all of you as well.

Please keep Lily and Jenelle in your prayers. These little girls deserve so much in life. Thanks!
Posted by Kelly 1 comment:

Words I never thought I'd say about Jenelle!

I keep a journal with Jenelle's teacher where we write down things about her day, or how she is feeling. Last night I read the words, "Jenelle pooped on the potty today!"

I never thought I'd ever read those words, let alone actually say them. If you recall, her new school has commenced potty training wherein the put Jenelle on the potty at scheduled times. At her 30 Day IEP review, we were told she'd actually pee'd on the potty three times in the first month of potty training. Well, apparently she has mastered "pooping" as well!

Still, we are not using this method at home. The teacher told me to wait until she gave us more instructions once Jenelle became more consistent. I never imagined we'd be able to potty train Jenelle - this new school is amazing!
Posted by Kelly 4 comments:

Some photos in the grass...

Some photos from our weekend - Jenelle enjoying (?) the grass. 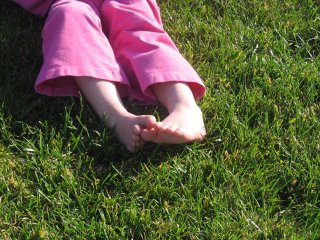 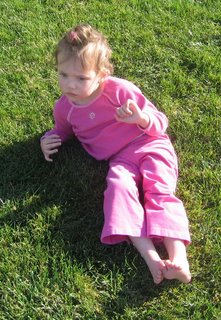 Sitting up so pretty! 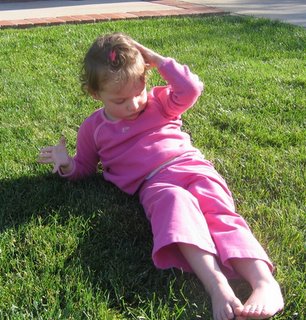 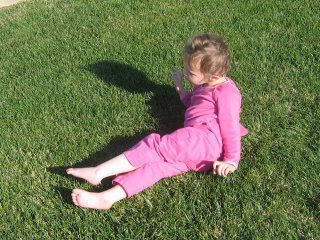 Trying to keep those feet off the grass. 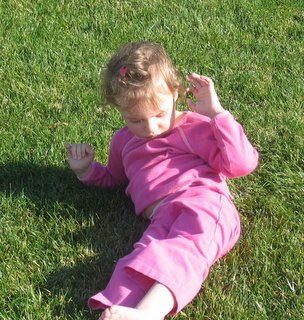 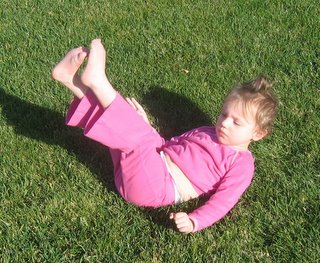 Tummy crunches are the best way to keep your feet off the grass! 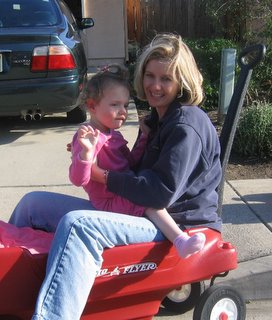 Jenelle & her Mommy riding in her new wagon from Santa!

First of all, I have wonderful news - As you can see below, it appears that Jenelle has reached a new milestone! While she is not "sitting up" in the way you would normally picture in your mind, she is lying on her side with her head up for about 5 minutes or more! If you were to casually look at her, you'd think she was just lying on the floor reading a magazine or watching TV. Her head control has been just amazing and I think she enjoys being upright in this position.

We had a little accident involving this last night though...Jenelle was lying in the hallway sitting up like this near the telephone. Big Brother Jack decided he wanted to use the phone to call Grandma and unfortunately the phone slipped out of his hand and hit Jenelle square on the head. For almost half a minute, Jenelle appeared to not even be phased by the flying phone, but then her brain caught up and she screamed and cried as you can imagine. After a few hugs and kisses from Mommy and Big Brother she was fine. The delay in response was hysterical as we all watched it happen and sort of held our breath to see if she was actually hurt. It is good that she shows these normal responses, even if they are a bit delayed.

Tuesday of last week we saw Jenelle's Kidney Doctor. Again Dr. Ben-Ezer was thrilled to see Jenelle and felt she was doing really well overall on the bi-carb supplement. Jenelle was much more animated for her this visit and gave her a few laughs and giggles. Dr. Ben-Ezer ordered some blood work to test Jenelle's bi-carb level and as of this update I have not received the results. Unless I hear from her, everything will remain the same prescription wise for her bi-carb supplement and we'll see the Kidney Doctor again in May.

Yesterday we saw Jenelle's GI Doctor and Jenelle is also doing well in that area. Jenelle's weight gain has been wonderful, but unfortunately this kid keeps growing in height! She is weighing 27 1/2 pounds, which is a pound and a half gain since last September, but she has also grown an inch and a half as well and is now 37 1/2 inches long! She was just barely 33 inches last January, so she has had quite a growth spurt. This puts her at the 15th percentile for weight, and 50th percentile for height. If you recall, Jenelle was actually "under" the chart for weight just last June, so she has come a long way.

Dr. Idries is going to keep her calories the same with her formula, but is encouraging us to try to feed her food by mouth again. If we let Jenelle go too long, she may permanently lose her eating skills and will remain dependant on liquid formula for life. I have noticed Jenelle has been taking an interest in our food sometimes, especially when she smells French fries. We are going to need to re-schedule her formula feedings so she will get hungry during the day when it is time to eat by mouth. Hopefully her school will also help with this as they have a lot of experience getting kids off G-Tubes. I think we may still keep the G-tube site for administering medications as it seems she is doing better seizure wise because she is getting an accurate dose of meds, and it comes in handy for keeping her hydrated when she is ill. We shall see.

That is all for now! Thank you for the continued prayers and support - I'll keep you posted!
Posted by Kelly 2 comments:

I Think This Qualifies!

This is the closest she's been to "sitting up" ... I think it qualifies! 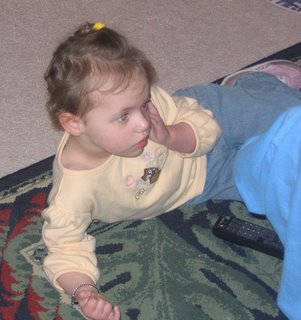 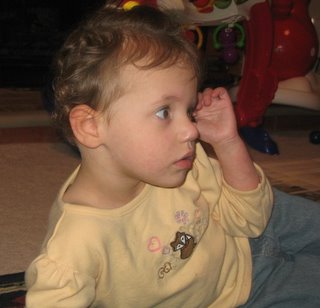 Today was my Birthday...

And Danielle gave me the best gift of all with this post. I am moved beyond words, and thought everyone would be moved as well. Enjoy!
Posted by Kelly No comments:

She's getting so big!

I've been sick with that cold Jenelle had over Christmas. No fun! This weekend, Jenelle and I had a great day together on Saturday. Brett took Jack to his cousin's house to play and I spent time cleaning the house and cleaning out Jenelle's closet. I can't believe she is getting so big. I removed everything from her closet that was size 2T and re-organized her many cute outfits. I kept Jenelle in her bed while I did this and we listened to music. It seems she can't stop moving these days, and love to roll all over the place.

While taking a break, I decided to jump into her bed and tickle her. She just cracked up laughing and really seemed to enjoy it. It also seemed she was watching me because every time I'd make a move to tickle her she'd get a huge smile on her face and just laugh. We had a great time doing this for a few minutes, then she rolled to the side to take a nap. Jenelle is a "cat nap" queen. It felt good to do something fun.

For Christmas, Jenelle got a V-Tech storybook that reads nursery rhymes aloud when you flip each page. After putting on her PJs Saturday night, I sat her in my lap and we "read" the book together. Usually Jenelle does not like to sit still for anything, but she seemed to enjoy this book. It was like I was really reading a bedtime story to her. So fun.

Tomorrow we see the Kidney Doctor. I'll update if there is anything new.
Posted by Kelly No comments:

As I was closing an unpaid bill for Jenelle from last May (that was finally just paid by our insurance) a funny thought occurred to me... So far this year, Jenelle has not incurred any new medical expenses ...yet! Then again, it is only January 4.
Posted by Kelly 1 comment: