I can't believe the last update was the end of March.  Then again, I can't believe it is August!  Before I update on Jenelle, I need to write out my feelings about recent events.  As always, writing is my therapy.

This year has kept me on my toes in more ways than one.  Life happens; and sometimes it ends.  My Father, who was 87, passed away on Memorial Day.  It was not exactly expected (i.e. it was not cancer) and in the grand scheme of things, it was quick.  A week before Memorial Day, Mom and Dad had performed with the choir at their Retirement Community and completed 3 performances for other retirement homes in the area.  The next morning, Dad woke up not feeling well.

Dad was admitted that day to the hospital with a "lower GI Bleed" where he received 2 units of blood product.  They stopped all of his medication, including blood thinners.  My Mom called me that afternoon, and I left for home the next day (My hometown is 3 hours away from my home now.)

When I arrived at the hospital to see Dad in ICU, he didn't recognize me and was very agitated.  His face to me appeared very swollen, and his mouth on the right drooped to one side.  Instinctively, I felt that he had had a stroke.  He speech was slurred, and he was strapped in bed because he had been "combative" the night before.  Dad did not have a combative bone in his body.  It was painful to watch, because really he was in pain and suffering.

Excuse my language, but I can only describe Dad's last 5 days in the hospital, and his ultimate death as a huge "cluster fuck."  As it turned out, Dad's lower GI Bleed was caused by a new medication he had recently started for a heart condition known as A-Fib.  Because he needed blood product in the ER, they stopped his medications including his blood thinners.  Dad's regular doctor who had placed him on the medication was "on vacation" with his only back up being the "ER."  While the hospital was bouncing him around from Resident to Resident trying to figure out why he was bleeding; we finally were assigned to a wonderful Hospitalist who eventually determined the cause of the bleed.  This doctor also listened to us and finally ran a head CT which found that sometime after his admission (and 3 days before the CT) Dad had a stroke.

At times, he thought I was his Mother, he mentioned that his Mother and Brother (who had passed away 6 weeks earlier) were with us in the room, and he directed music with a tooth brush (Dad was a musician).  He was irritable, incoherent (slurred speech at times), inconsolable, and the medications given to calm him down often made it worse.  We were told this is how elderly people respond in the hospital - the dementia kicks them into a panic mode.  Fight or flight.  Because we had not identified the stroke until 3 days later, Dad aspirated on some food,  which eventually caused pneumonia, and led to infection/sepsis.  Call it a "snow ball from hell", a "train wreck" or a "cluster fuck" - with one thing on top of the other it ultimately led to Dad's death.  And believe me, I'm leaving out a lot of the horrible parts of those last five days.

Dad passed away in the morning on Memorial Day with my sister and her husband by his side.  Mom arrived a few minutes after he passed, and I was at home in Orange County waiting for the final call.  My sister had called me on the way to the hospital to prepare me, so I pulled out my Book of Common Prayer, and read a prayer "to be read at the time of death" during the minute of his actual death.  I even sent a photo of the prayer to my sister. 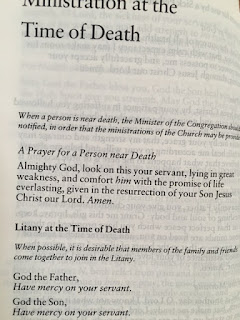 About 10 minutes later my Brother in Law called to give me the news.  It was that quick. I am at peace with that, and for not being there with him.  The time I snapped the photo of the prayer on my phone was ironically the time of death on his death certificate.  I truly was with him in spirit.

I wrote the eulogy for Dad's service.  It was a beautiful service early in the morning on a very hot June day (108 degrees).  For those not familiar, the Episcopal service is very plain.  It is intended to be that way so that any man, rich or poor, is treated with the same dignity at his funeral.  Because Dad was a Veteran; the military presented a flag to my Mother.  In my opinion, it was probably the most emotional part of the service.

Here are some excerpts from my eulogy:


Hello, I am Kelly, George’s youngest daughter.  On behalf of my Mom and Sister, and our families, we want to thank everyone for their outpouring of love and sympathies during this time.  Thank you also for being here this morning.
~~~~~~~~~~

There are many words we use to describe my Father George.  Husband, Daddy, Brother, Uncle George, Poppa George, Teacher, Band Leader, Officer, Veteran, and a True Gentleman. Dad loved his family, his music and tradition.

Dad was born on Christmas Day, 1928. Two years later his brother James Arlin, “Jim” was born.  Daddy and Uncle Jim grew up as typical Southern California boys – summers in Dana Point, Junior Life Guards in Newport Beach, and nights out  dancing at Balboa Pier.  Daddy was very close to his brother as they were in the same grade.  Football, Church Choir and Acolytes, Eagle Scouts and eventually University of Southern California where they both pledged together their father’s fraternity, Sigma Alpha Epsilon.  While they were close, they had different personalities – Uncle Jim played football at SC while Dad played in the Trojan Marching Band.  George was preceded in death by Uncle Jim almost 6 weeks to the date.

After college, Dad served in the United States Navy through the NROTC program, and then onto graduate school at UCLA for his teaching credential in music.  Dad proudly served in the Navy during the Korean War, and the early beginnings of the Vietnam War.  He sailed most notably on the USS Iowa (which we toured three years ago), the USS St. Paul, and the USS Missouri among others.  I believe his love of the military life style fit best with his musical qualities and expertise in marching band.  Both have a sense of order with deep rituals and  Dad loved that.  After the Navy, Dad landed his first teaching job to be the music director at a high school in a small town in central California.  This was the beginning of his years in Lindsay, and where he met Mom.

Dad was the band director and Mom was the home economics teacher at Lindsay High School in 1960.  Their first date was at the Pagoda Room in Hanford, and the story goes that Dad proposed on the first date!  Mom said no at first, but Dad kept pursuing her with roses, songs and dedicating the band’s half time shows to her.  They were married six months later during their winter break on December 22, 1962 at St. James Episcopal Church in Lindsay, CA.  The last half time show before the wedding, Dad’s band played “Get me to the Church on Time.”

Mom and Dad settled in Lindsay with Lindsay High School band becoming the  center of their lives.  Parades, Concerts, Band Reviews, Half Time Shows and one amazing trip with 200 band students to Japan in 1973.  Dad’s band was big, famous and well known in the central valley music community.

He loved his daughters.  One of my fondest memories growing up in Lindsay, was when Dad would wake us up at 6:00 AM to watch the TV Station come on air (remember when we didn’t have 24 hour TV?)  We would all stand at attention, saluting the flag as the station played the National Anthem.    God, Family, Country, and his Music.  These were the many things he was most loyal.

Dad’s other love was USC, and his Fraternity Sigma Alpha Epsilon.  Dad never tired of his memories of being in the Trojan Marching Band, or the USC Fight Song.  College football was always more fun watching the Trojans with Dad.  Once a Trojan, always a Trojan.  Fight on Daddy!

George had a very dry sense of humor, but it was one of his most amazing qualities.  Every time he had an x-ray, he’d ask the radiologist for an 8 x10 and some wallets.  When riding the jungle cruise at Disneyland, he always had a delayed laugh to the canned jokes.  His grandsons loved his jokes, and enjoyed “wrestling” with him and pretending to be a seal.  George was very deaf, but many would say it was mostly selective hearing.  His delayed response often added to his humor.

George was blessed with four grandchildren; Matthew, Eric, Jack and Jenelle.  He lived long enough to watch Matt and Eric grow into young men, and to see Jack play many sports.  Jenelle is the only granddaughter, and she and Daddy had a special bond of just holding and hugging on each other.

Mom and Dad had 53 years together in marriage.  In 1977 they moved from Lindsay to Visalia where they stayed for the remainder of their years.  They were very active in bible study, book club, and St. Paul’s.  Mom and Dad moved to the Quail Retirement Home two years ago, where he lived until death.  Dad really enjoyed being involved in the Quail Veteran’s day festivities and enjoyed wearing his uniform to dinner.  Mom was the love of his life, and his best friend. I know she will miss him very much.

George has touched so many lives with his gift of music, his guidance counseling and his love for his girls, including Bettye.  He was an amazing gentleman, and we will miss him very much. 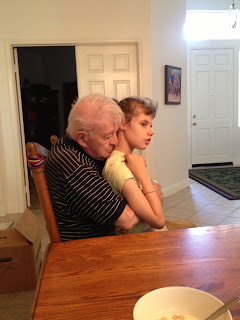 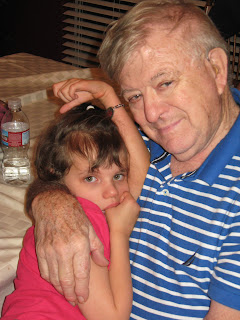 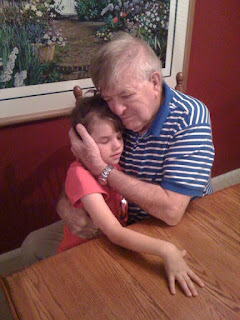 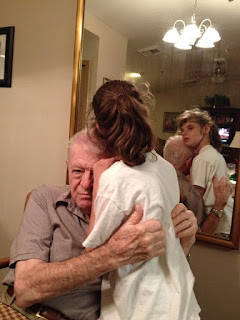 Grief is a strange thing.  It comes at goes and at times catches me when I least expect it.  I do have to say, that because I'm Jenelle's Mom, I've acquired a skill to receive and digest a vast amount of life changing information in a short amount of time.  I think that skill helped me most in the final week of Dad's life. He is at peace now, and suffers no more.  Dad was always great at making Dove calls, and recently a Dove moved into my back yard.  I know he watches over me and my family, and I am who I am because he was my Father.  I am at peace with his passing, and again, I miss him very much.