It seems like so much is happening lately its hard to remember where I left off on the last update. Jenelle is fine today, and we are anxiously waiting for our next appointment at UCLA. However, the last two weeks have not been easy for our girl. If you recall, Jenelle and her brother had a bit of the stomach flu on January 4. This episode has really taken a toll on Jenelle and her seizures have increased. On January 10, almost a week after the vomiting incident I noticed that Jenelle was abnormally sleepy on the way to school. That afternoon, Grandma had transported her from school to daycare and called to tell me she was seizing the whole ride. Also, school said she was barely eating and I knew she was doing the same thing that morning, so I called her doctor and asked to bring her in. I thought we should check for ear infection or other problem since Jenelle cannot always tell us what is wrong.

We saw the doctor and he examined her to find her ears were clear, but throat had a "raging infection." We both agreed this was in relation to her stomach bug the week before. As he was about to give me a prescription for an antibiotic, Jenelle had another lengthy seizure in front of him. Dr. Patel decided this was not normal for Jenelle and instructed me to take her to the ER instead for lab work and possible IV fluids. He just wanted to be cautious. We had tried so hard to keep her from the ER the week before, but I agreed it was the best thing to do. Also, we were not going because her seizures were out of control, but rather that they were indicating she just wasn't well. It was raining and almost 5 p.m.. but to our surprise, the ER was empty!

We were seen by a resident who took down Jenelle's extensive history, and of course was unfamiliar with her type of Epilepsy. He examined her throat and said it was fine. This should have been our first clue to run. The resident then left to return a half an hour later informing us that he spoke to the on call neurologist, and he wanted to add a drug called Keppra to the drugs Jenelle was already taking "since it was obvious her current medications were not working." Almost in unison Brett and I replied, "No" and "Did you call UCLA?" to which the resident was most surprised! I don't think he ever had a parent decline his instructions, let alone question his advice. Again, we were not there for her seizures, but rather to make sure she was well. They ran some lab work and long story short the results were normal, but did show that she was either getting over a virus, or just starting one. We left with a prescription we did not intend to fill for Keppra. I spoke to UCLA the following day, and they told us Keppra was not a good drug for her seizure type and to disregard the prescription. I sure am glad we knew what we were doing!

Jenelle continued that week to have more seizures, but started to be more like herself towards the end of the week. Unfortunately, on Friday the 14th, Jenelle had a grand mal in the car on the way to daycare. I was able to pull over to assist her as it didn't look like she was breathing. She was fine and it only lasted a little more than 2 minutes. It was a bummer though because I don't think we've seen a grand mal since early November? Seizures always keep us on our toes - just when you think they are gone! The day after her grand mal, Jenelle has a slight fever of 100.8, so I assume she was still not 100%, which of course is the reason for the recent grand mal.

Like I said at the beginning of this update, Jenelle is doing well now, and we've seen a decrease of seizures these last two days. Attached is a recent photo of the kids at bedtime, ironically the night before Jenelle's grand mal last Friday. It is a rare one in that Jenelle is not sucking her thumb, and you can see her pretty face! This is now my favorite photo - enjoy! 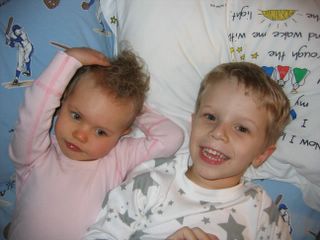 As always, thank you for the continued prayers. I'll keep you posted!

I have been so excited about the good news I have to report that I could hardly stand it. However, knowing our past experiences, I'm not trying to get my hopes too high…. Anyway, lets start with the not so good news first! ;)

Four days into the new year and I am reliving vivid memories of Jenelle's 5 day stay in the hospital from Roto Virus last January. Yep, BOTH kids woke up on Tuesday vomiting! OH JOY! Actually, as a colleague stated - better to have both kids vomiting at the same time for 24 hours instead of 48 hours of kids vomiting! Good point! Jack was sick first, but thankfully at age four he can hold a bowl for himself and has good aim, so he really didn't need much more than some crackers, liquids, a dry place on the couch and the TV. Jenelle on the other hand with her issues was a little scarier. She started vomiting a couple of hours after Jack, and of course, an hour before her next dose of anti-seizure meds. Because of her low muscle tone, I literally had to "help her vomit" with the aid of a bulb syringe (too much information? Sorry!) Brett and I never left her alone because of the risk she has of choking. Later in the morning, I put in a call to UCLA who instructed us to give her Diastat (her emergency use anti-seizure med that is given rectally) in place of her morning meds since it was obvious she wasn't going to keep them down. This worked well and kept her seizures at bay - though she still has been having more seizures than usual. Both our local doctor and UCLA advised us to take her to the ER for IV fluids to help dehydration - however, we really didn't want to go there, so Brett and I decided to give her 1 tsp. of pedilite every 20 minutes until she could hold it down. After a couple of hours, it worked and we avoided the ER. Luckily by the evening both kids were fine and holding down Jell-O! Jenelle has had more than her usual amount of seizures this week since Tuesday, but I attribute it to the bug and missed medication. Other than the bug, she has been doing very well on Felbatol.

Now, the exciting news! We have an appointment to see Dr. Shields again next month, so I put in my usually advance call to UCLA to get the ball rolling for our request for HMO authorization for the visit. Usually it takes a couple of weeks for the HMO to deny the visit, have me appeal, then approve our request. While on the phone with UCLA, I casually asked if their Ketogenic Diet Program was accepting new patients again. Sure enough, they are! Then, the girl who was helping me said, "Why don’t I just put you down for a Keto Diet Consultation with Dr. Shields for your next visit in February?" Sounds good! Our HMO has already informed me (in writing) that they would pay for Jenelle to do the diet at UCLA, so it has already been approved! I'm not sure how quickly things will happen, but I'm hoping we can at least give this diet a try sometime this year. I've always felt that if we try the diet, we'll either find the "magical cure" we've been looking for, or we'll find something to point us in the direction of a diagnosis for Jenelle. Either way, after trying 8 medications where none of which have ever completely stopped her seizures, I think this is a valid next step! At the very least, it is promising to hear that UCLA's program is up and running again! As for the doctor at UC San Diego - I spoke to his nurse on Wednesday, and he still has not reviewed Jenelle's records, though they are the top of "his stack!" I am supposed to call back in two weeks.

I'll update again soon to keep you all posted. Thank you all for continuing to keep Jenelle in your thoughts and prayers!