Last night, or rather around 5:30 this morning, Jenelle woke up crying. I jumped out of bed and ran to her room, fearing a seizure only to find Jenelle sitting up in bed rubbing her eyes. No seizure, and she didn't seem sick... apparently Jenelle woke herself up from a bad dream.

I crawled into her bed and tried to comfort her. Jenelle was clearly agitated and restless. Soon though, after some cuddling with Mom, she went back to sleep.

At breakfast, I mentioned to Jack that Jenelle woke up from a bad dream. Jack replied, "What was she dreaming about?" In unison, Brett and I said, "I don't know, she didn't say."

All day I've been wondering, what does Jenelle dream about? The child has a high tolerance for pain, and has no concept of fear. What could have upset her so much? Brett and our daycare provider Valeria both suggested that perhaps she was crying because there was no food. Jenelle loves food more than anything.

What do you think she dreams about?
Posted by Kelly 1 comment:

Last Thursday, I came home from work and found a message on the answering machine from my oncologist. The numbers of neutrophils from my last blood draw (the Friday before) were very low and she instructed me to stop my chemo. Knowing that the oncologist is in the clinic as late as 7:00 p.m., I called to get her on the phone. Sure enough, she answered and told me I had 700 neutrophils, and to forget about any trips to Disneyland. She asked me to go to the lab the next day for another blood draw.

The low number didn't surprise me. I felt like I had been fighting off a virus for some time. The next morning, instead of sleeping in, I went to the lab for a blood draw. Four pokes later and they had the blood they needed. The order was STAT, so I expected if it was worrisome, I would hear from the doctor ASAP. Remember, anything below 500 neutrophils and I have to be hospitalized.

The weekend came and went without any urgent calls about my numbers, and finally today I got word that everything was back to normal and I could start chemo again. I am scheduled to start ATRA (vitamin A) this week, so I expect to be a bit more fatigued toward the end of the week as I will be on three chemo meds for the next 15 days. Ironically, I was talking to my parents this afternoon, and told them how I had stopped chemo because of the low neutrophils. My Mom was surprised that I could stop and start so quickly, so I explained that it wasn't a medication that required weaning. When she asked me if I was tired, I realized that since stopping chemo last Thursday, I had been battling a little bit of insomnia. I suppose those extra days off chemo will help me this week, and hopefully my sleep patterns will get back to normal.

Cancer seems to be looming all around us lately. Two friends of ours were recently diagnosed with various forms of cancer and a third has entered hospice. A blog friend of mine donated her hair to Locks of Love and said I inspired her. I also had the opportunity to meet a wonderful little boy from our Little League who has been fighting Leukemia (ALL). He has been having a rough time of late, but really wanted to be in the team photo with his team this year. He sat there in a uniform on top of a container of baseballs with bandaged hands and a hat covering his bald head. As I introduced myself, he remembered hearing about me last year. I could tell (from experience) that he was using all of his energy to be apart of the activity of photo day. He looked tired, but he was a fighter; I could see it in his eyes.

And with that, I am reminded that cancer comes in all forms, and does not discriminate against age, sex or race. The experiences are similar, and yet different for each person. And even with the differences, for those who survive the answer is the same; life is so very precious.

This week, my firm has been selling daffodils for The American Cancer Society. With the deadline to order fast approaching, I read the e-mail with the description of each donation. For a small donation, you could purchase daffodils with or without a vase, or for a larger donation, daffodils to be given anonymously to a cancer patient. You could also purchase a teddy bear for a child with cancer. And then I remembered going through out patient chemo last March - how The American Cancer Society had a table of daffodils that they handed to each patient in the oncology waiting room. So, it is true... you can anonymously donate flowers to a cancer patient, and as I can attest, they will get into the hands of a cancer patient.

I decided to make a donation for a teddy bear to be delivered to a child with cancer. I am confident that my bear will make it to a child like the one I met on Saturday. And like the flowers, I hope it fills that child with strength to survive the battle and revel in the reward of precious life.
Posted by Kelly No comments:

All I want for Valentine's Day is my Two Front Teeth!

Well, Jenelle finally lost her two front teeth, and of course there is a great story to go with it. On Saturday, Jenelle and I were out and about doing lots of errands and enjoying the sun. While running errands, we stopped to have lunch at Baja Fresh. It's times like this where I get to enjoy moments of feeling normal with Jenelle. I was able to order off the menu at Baja Fresh for Jenelle (a bean and cheese burrito for me, and beans and rice for her) and we ate outside enjoying the sun. We had already been to a couple of stores, and I knew Jenelle's patience was going to run out soon.

Our second to last stop was Target. I had a few things to get, so we spent a bit of time up and down the aisles. All of a sudden, Jenelle started crying. Thinking her patience was done and this was her typical tantrum, I ignored the crying and screaming and continued to shop. After a few minutes, I felt a tap on my shoulder. A kind woman quietly tapped on my shoulder and said, "Excuse me, but your little girl is bleeding!" Yes, I am a bad mommy. I was ignoring Jenelle's cries thinking it was nothing to eventually be told by another customer that she was actually injured.

Once I realized where the blood was coming from, I knew she was OK. Jenelle finally took care of that pesky loose tooth when she was biting on her wheelchair arm. It was still hanging in her mouth, so I pulled it out and ran to the Pharmacy where they gave us towels and a bag to keep the tooth. Jenelle was quite upset - I'm assuming it hurt, and she doesn't quite understand shy she lost a tooth. Eventually she calmed down and we were able to make our last stop at the grocery store without incident.

The next day, Jenelle was very giggly. In the afternoon as I was changing her diaper, I noticed the second front tooth was gone. No blood, no tooth. I assume she swallowed it.

So that was our weekend. Last night Jenelle was all giggles and smiles and I got a great photo of her missing teeth. Here she is... 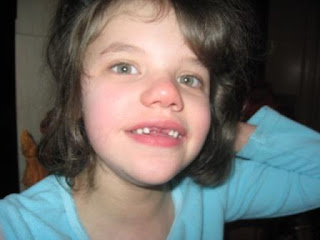 I love this photo. You can see the sheer joy in her face as Jenelle was in the process of "jumping" when I snapped this photo. She is such a wonderful girl! 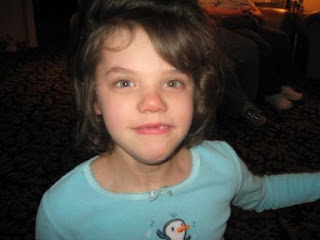 Have a wonderful weekend and thank you for continued prayers. We'll keep you posted!

An update for Poppa George

My Father (Poppa George) tells me that each morning, he logs onto his computer and this website is the first thing he checks. On Monday, he told me that it had been too long since my last update. Sorry Dad, this one is for you! ;)

I had been waiting to post an update hoping to share news that Jenelle had lost one of her two front teeth (which has been wiggly for a while) but alas, that darn tooth is stubborn and hasn't fallen out yet. Any day now. Unfortunately, the wiggly tooth has agitated some seizures out of Jenelle. She has had an increase in seizures lately which I hope will subside once the tooth comes out. Let's hope!

Last Sunday, the family went to Jack's school for Open House. Two days earlier, his school celebrated "Special Person's Day" and Jack choose me as his "special person". My heart just melted when he asked me. The day included a special prayer service, a craft and a tour of his classroom. Since I had already seen everything on display in Jack's class, I let Brett take the tour with Jack while I distracted Jenelle. I took Jenelle to the white board and started writing the letters in her name on the board while she watched. As I did this, Jenelle reached out and put her hand over mine as if to write her name "hand over hand". A few days later, I asked her teacher if this is something they did in school and she said "all the time!" It's so fun to see Jenelle do things in everyday life that she learned in school.

The family is getting into gear for baseball season. Brett is managing Jack's team again this year and coaching for Jenelle. And just as basketball was about to end, Jack was selected for All Stars, so it looks that we will have a few more weeks of that as well. We are so proud of Jack.

I had a follow up at UCLA today, and am still cancer free. In two weeks I will start my Vitamin A regimen again for 15 days (ATRA, my 3rd chemo medication that I take every 3 months). My blood work was good and the doctor thinks my recent fatigue is from over doing it a bit. One step forward, one step back.
Other than that, things are good!

That is all for now. Thank you for the continued prayers! Love ya Dad! ;)
Posted by Kelly 1 comment: