Big Brother Jack started Kindergarten this morning! This may be the first morning we didn't have a problem telling Jack to get up and get dressed. As you can see, he was thrilled! 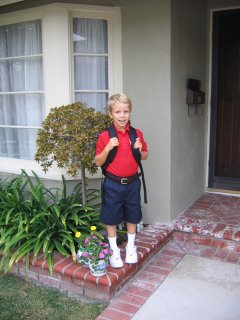 Brett, Jack & Mom at Jack's new desk. Two kids from summer camp were in his class, so he was very excited to see his old friends. 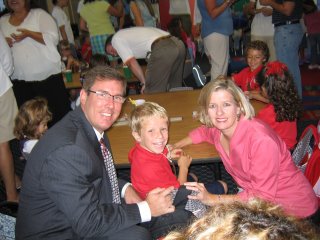 Here is Jack posing next to the new paint in his room. I think he may be right... It looks a lot like "Dodger Blue!" Yikes! 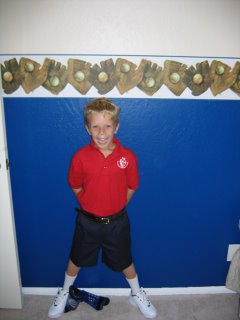 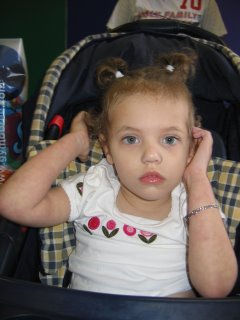 I know all of you "organization freaks" will love this... My idea to help Jack know what to wear each day of the week! Pretty organized, huh? 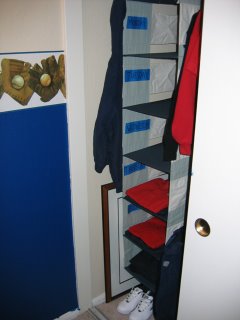 Jenelle is doing well but keeps falling out of bed! I really need to get going on that request for the Sleep Safe Bed! Argh!
Posted by Kelly 2 comments:

Jenelle fell out of her bed this morning. It was barely a year ago when we put her into the "Big Girl" bed. Now that she is sitting up, I knew this was close to happening!

I was brushing my teeth and Brett heard a thud. We peeked into her room and found her on the floor - laughing! At least she didn't hurt herself, but this means we need to get working on insurance to get a new bed. I am liking the sleep safe beds I've seen in magazines. Click here for their website.

Nothing else new to report. Our little girl is doing well other than her big adventure this morning. Have a great weekend!
Posted by Kelly 1 comment:

Jenelle beat up a 1 year old!

Can you believe I'm actually excited to tell you that Jenelle "beat up" a one year old? Well, "beat up" is a bit of an exaggeration - in realtiy, Jenelle fought for a toy. If Jenelle were a normal child, you'd expect me to be worried about this behavior, but instead I'm so proud of her.
Last Saturday, we had dinner with friends. Altogether there were six kids; Jack, Jenelle, a 5 year old girl, an almost 3 year old girl, an almost 2 year old and a baby that just turned one. During dinner, Jenelle sat in the living room that was already baby proof with various toys sitting around her. She had taken a liking to a tiny toy piano with Barney on it and was at times kicking it to get it to make music.

The one year old baby arrived late to the party and was placed on the floor near Jenelle. It was amazing to see how small this child was in comparison to Jenelle's almost 4 year old body frame, and how she could do so much more developmentally than Jenelle. The baby was not yet walking, but could crawl fast and get into things easily. Eventually, the baby took an interest in Jenelle's Barney piano.

I slowly watched the situation to see what Jenelle would do next, because even though it seemed she wasn't playing with the toy, I knew she was still interested in it. I watched, and all of a sudden, Jenelle rolled onto her side, leaned back, and kicked the baby square in the chest - not too hard, but enough to roll the baby back away from the toy! The baby screamed bloody murder and her Father (who thankfully witnessed the whole incident) picked her up, moved her to the other side of the room and got her interested in another toy. And then we laughed.

I am so curious to know now exactly what Jenelle is thinking. I would love to communicate with her somehow. Clearly, she wanted to get the toy back, and that was her way of responding to the baby. I am so proud! She's come a long way, don't you think?
Posted by Kelly 5 comments:


I saw this video for the first time about a month ago. I still can't get through watching it without crying. This is such an inspiration as to Jenelle's possibilities in life.

Jack started Summer Camp today at the blind children's school Jenelle used to attend. I enrolled him into this camp for two reasons; 1) Summer camp in August for a 5 year old is a rare find in deed! And 2) I want him to experience other children that are like his sister. Today as we arrived, Jack noticed a little blind boy standing next to his Aide with his eyes closed holding a cane. Jack pointed and said, "Look Mommy, that boy has his eyes closed." I finally got to say the one thing I've been longing to say, to help Jack realize that all kids are different.

A year ago, our friend Kim (Lily's Mom) wrote what I thought was a very poignant piece about "The Short Bus" and teaching our (typical) children to accept that other children may appear different on the outside. Here is a short bit of that piece she wrote on June 15, 2005:

Since Lily got her wheelchair we have heard many comments and some are ok and some not so ok. Here are some examples of not ok. One little boy went right up to Lily, looked her over and then pointed and laughed. I shot his mother a look and she didn't seem embarrassed at all. A little girl at the mall just stared at Lily and finally yells "why is she in a chair?" Her mom said nothing, just ignored her daughter.

An example of ok behavior is at the Dr.'s office a little boy says "look mom she is in a chair" and his mom said "yes and you can be her friend." I almost cried with that comment. Kids are going to stare, point and ask why Lily is in a wheelchair and they should. Kids are filled with curiosity and they have honestly spewing out constantly. Our job as parents is to educate our children and show them that it is ok that there are kids in wheelchairs and kids that walk differently and talk differently.

These kids need to know that they don't have to be afraid or make fun just because they are different. I know this is all easier said than done but I am asking you parents to take that extra step to educate your kids, don't quickly shhh them and change the subject. Tell them that God made kids like Lily differently and she is still a kid just like you.

So when Jack pointed to this boy and stated matter of factly that his eyes were closed, I replied, "Yes, he is blind and he cannot see. And that is O.K., you can be his friend!" To which Jack looked up at me and simply smiled.
Posted by Kelly 3 comments:

Jenelle's School had a "Promotion & Award" celebration today. It was very touching to see all the children with different abilities. Jenelle got an award for "Most improved with eating and drinking!" We are very proud. Here are some photos:

Jenelle getting her award from Principal Abby. Her teacher Darlene is at the podium. 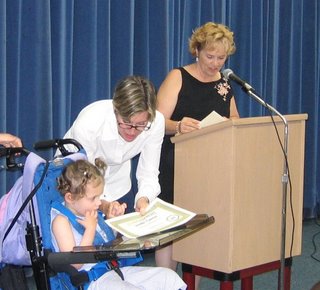 Jenelle smiled when she got her award! 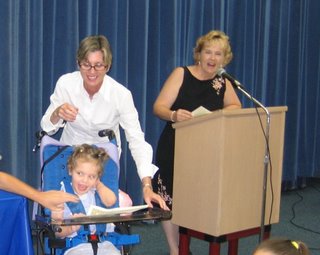 A close up of Jenelle admiring her award! 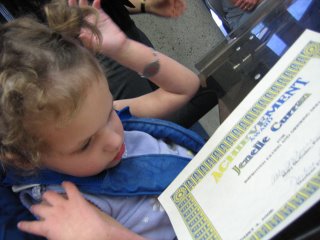 As for an update on the "discipline" front. Jenelle has not had any time outs since the second day. Now, all we have to do is threaten a time out, and she stops her behavior. Also, the increase in Tranxene during the day is keeping her calmer, but hasn't done away with her smiles and laughs!
Posted by Kelly 3 comments: