Knock wood ... we have passed the significant side effects for Onfi!

The problem with Facebook is that sometimes I forget to post updates here!  Wow, where has the time gone?  Well, the summer has been interesting with the side effects caused by Onfi.  We finally got past the constipation issue, and Jenelle is having regular bowel movements again which makes everyone happy!

Jenelle started Challenger Cheer again on August 1, but unfortunately the second side effect from Onfi began; sleepy, drugged our little girl.  At JAMZ Cheer camp one Saturday, Jenelle slept through the entire 3 hours.  Even though she slept, she earned a couple of JAMZ ribbons; one for "rowdy cheer" and another for "amazing stunts!"  I guess sleeping in a wheelchair is considered a cheer stunt! 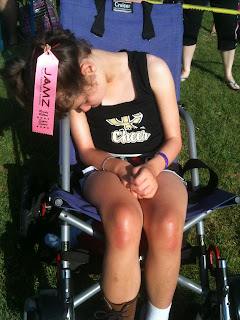 So, this went on for a few more days.  Brett and I started to feel concerned when Jenelle's YMCA Inclusion Aide sent me a photo of Jenelle sleeping all day at summer camp.  While we hadn't seen any seizures since starting Onfi, we started to consider whether or not her quality of life was being significantly impacted.  Yes, it's wonderful to not see 3 and 4 minute grand mals every other day, but what happened to our little girl?  She can't walk, she can't stay awake, she won't smile... where did she go? 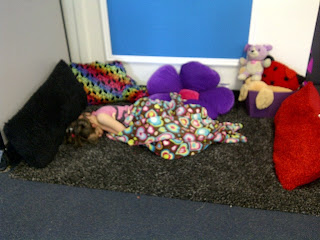 The next day, I e-mailed Dr. Shields to give him an update.  By the end of the day, he recommended cutting the Onfi dose in half, and basically only giving it at night.  The change was immediate, and significant!  We got our girl back!  The only problem now was to see if the change would bring back seizures.  Here is a photo of Jenelle the day after the decreased dose of Onfi.  Again, she was at YMCA in her "soft corner" but this time, she was awake and singing to classical music! So, the good news is that Jenelle is much more herself on the lower dose of Onfi.  The "OK" news is that we started seeing seizures again.  Mostly absence seizures (staring seizures) which haven't been a problem for a long time, but as you know Jenelle likes to mix it up, and unfortunately we've had two grand mals since lowering the Onfi dose.  Sadly, her last grand mal happened during Challenger Cheer last Saturday.  Poor thing scared her coach a bit, but slept it off and was back to normal later that night.  I'm going to give her until after Labor Day weekend, then e-mail Dr. Shields again for his thoughts on our next move with medication.

Remember that "new problem" we have now with Jenelle's short leg and small hand?  The technical diagnosis for this is called "para paresis", and this diagnosis might get Jenelle to finally qualify for CCS (California Childrens Services); a program here that helps to pay for much of the necessary medical equipment Jenelle needs and will need.  Yes, if you are a special needs parent, you are probably stunned that Jenelle does not have CCS.  Apparently, she was born at the same time CCS changed their qualifications, and Jenelle fell into a loop hole of being "undiagnosed" so we were denied CCS three times.  If Jenelle continues to have problems with her short leg, we could be looking at significant equipment needs in the future, so we're keeping our fingers crossed she is accepted!

The kids start school next week, and life is starting to get back to normal in the Curran home.  Because we just can't have one issue to deal with, Brett injured himself coaching Jack's football by walking into a gopher hole.  He tore his calf muscle and was on crutches for over a week.  Fun times!  He should be fine in time.  Like I said, normal for the Curran home!

That is all for now - I will keep you posted!