Almost to the end of Felbatol, and we are battling pesky cluster seizures

As we get close to the end of our almost year long wean of Felbatol, things are getting much more interesting with Jenelle's seizures.  This month, we've had a trip to the new CHOC ER via ambulance for a 35 minute absence seizure, and we've used Diastat twice.

Our ambulance ride took place on September 7 during one of Jack's Pop Warner football games.  It was a very, very hot and humid morning, but not as hot as it had been.  Jenelle was somewhat hydrated and had just had her morning meds.  Under our Ez-Up, Jenelle took an interest in sitting with Grandma.  As we got her up from her chair, she fell to her knees and became very uncooperative.  After a few moments of trying to get her to stand, I realized she was having an absence seizures (petite mal seizure.) We began to time it, and Jenelle was unresponsive for almost 4 minutes.  She came out of it and was able to sit in Grandma's lap, but then started seizing again for another 3 minutes.

Fortunately, Jack's football team had an EMT on stand-by and located near where we were sitting.  When Jenelle started a her third, lengthy absence seizure during that small 15 minute time frame, I knew we were going to need to administer Diastat.  We called over the EMT to help us monitor her heart rate after giving Diastat.  To my surprise he also had oxygen, so we used that as well.  Jenelle did not respond to the Diastat like she usually does, and did not seem to wake from her seizure state.  Once we approached the 9 minute mark, I called 911.  At that point, I didn't want her to fall into status epilepticus (constant seizure state), and was thinking that blood work and other tests would help us figure out what was going on.

I wish we had called 911 sooner than 9 minutes.  Because we were at the back of Foothill High School on the football fields, the ambulance had a tough time finding us and took almost 10 minutes to arrive.  So now, the one seizure was going on 20 minutes, not including the initial 8 minutes of short seizures she had before that.  Epilepsy advocates always tell you to call 911 after 5 minute for this very reason.  After the 20 minute mark, a seizure can start to inflict brain damage.

Once the paramedics arrived, I explained where we were in the seizure, and that I wanted her transported to our local Children's Hospital ER.  I was hesitant to give the second dose of Diastat because that would really lower her heart rate and oxygen levels, so I asked the paramedics what they wanted to do.  They weren't convinced that she was seizing - even though everyone knows that Mommy is always right, right?  They agreed to transport her but felt she was sleeping in a post-ictal state.  On our way from the field to the ambulance, I kept pointing out her twitching, and the electricity I could feel in her arm.  Her vitals were fine and her pupils were responsive, so the paramedics still didn't believe me.

In the ambulance, I insisted that we consider giving the second dose of Diastat.  The EMTs were still unconvinced that she was still seizing, but agreed to give her a smaller dose of Versed (3mg).  As the ambulance started out and was moving down the street; the EMT administered a needle into Jenelle's shoulder and started to inject the Versed.  Before he could finish the injection... Jenelle bolted into an upright position on the gurney, sighed, and was once again responsive.  This goes to show that you should never underestimate the parent of a child with epilepsy... we know our kids better than anyone!  The EMTs were stunned and said, "Well, I guess she was seizing! Mom, you were right!"  After a few seconds, she fell back onto the gurney and slept the rest of the way to the ER.  I overheard one of the senior EMTs talking later to a rookie EMT who had been on the job only 3 weeks.  The seasoned EMT said, "In your entire career, you may never see seizures like the one you just witnessed again.  Very rarely do they require transportation, and they are very hard to spot!"

At the ER, they ran blood work and urine tests - both of which were normal.  They contacted Dr. Shields at UCLA, and he gave us instructions to increase her Onfi to 15mg at night, and 10mg in the mornings and to hold off on lowering the Felbatol dose another week or more.  Jenelle was released from the ER 4 hours later and slept most of the evening.  Ironically, one of our players had been at the ER for a broken arm just prior to our arrival.  Jenelle was wearing one of Jack's old jerseys, so when she arrived, a nurse saw her and said, "What's with the football kids today?!"

Jenelle did pretty well the rest of the weekend, and during school that week.  However, a week later on Sunday, she slipped into a 7 minute absence seizure at home (first a 3 minute seizure, then a 4 minute seizure less than a minute after.)  I quickly gave her Diastat and she came too much like she did in the ambulance.  I'm not sure how long she had actually been seizing at the football game the week before, so our delay in giving Diastat decreased the chance of our stopping the seizure.  Because I didn't wait at home, she responded much quicker.

Since increasing the evening dose of Onfi, I felt Jenelle was starting to stabilize again as we were seeing less lengthy absence seizures.  On Monday, I decreased her Felbatol dose again, and towards the end of this week (including today) we are seeing more seizures.  I e-mailed Dr. Shields' nurse this morning, asking if she wanted to increase Onfi again.  She agreed that an Onfi increase would help, and that we need to see Dr. Shields sooner than our scheduled appointment for end of December.

During all this time, we also had Jenelle's annual IEP.  There are some things happening with that to update on, but this has been long enough, so I'll save it for later.  Last Sunday, we celebrated our niece Kiersten's 6th Birthday at the Santa Ana Zoo.  Jenelle had a wonderful time riding the carousel like a big girl.  I hang onto these moments of normal to help me through days when her seizures are out of control and I wish I could read her mind. 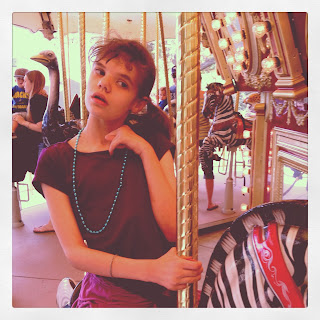 That is all for now.  Please say some special prayers that the coming weeks of the Felbatol wean are uneventful for our girl and her seizures.  I hope it's only the medication, and not the start of something new.  Thanks and I'll keep you posted!

P.S. I know that many of you are personal friends of ours on Facebook.  Prior to our trip to the hospital, we had plans that evening to attend my boss's 40th birthday party which was taking place on a boat in Newport Harbor.  The whole family was invited with kids too!  However, prior to that weekend, Brett and I agreed to make arrangements for a nurse to watch Jenelle at home that evening as we were not comfortable taking Jenelle on boat cruise on the water.  We had plenty of time before the party, and even hesitated about going.  However, Jenelle had been well drugged, was sleeping well and in good hands with a registered nurse.  We decided to go to the party as planned and spend a much needed evening with Jack.

During our ambulance ride, I posted an update on my Facebook page asking for prayers because at that time, Jenelle was still seizing.  Now, if we are your friends on Facebook, and your "newsfeed" settings on Facebook are set to "most popular" updates instead of "most recent" updates; you will see updates that have the most "likes" and "comments" at the top of your newsfeed.  Of course, my post about Jenelle had an overwhelming amount of response, so my  update remained at the top of the newsfeed for many of our friends who's newsfeed settings are set to "most popular."   However, later in the evening, many were very confused when they later saw Brett and I post photos of the evening sunset, and about cruising the harbor with friends; thinking that we had insensitively left Jenelle alone at the ER.  Believe me, that was far from the truth.  I hope this information is useful about Facebook, as opposed to being defensive about our parenting.  Things change in an instant with a child with special needs.  We always appreciate the love, prayers and support we get from everyone... and we apologize for any confusion on Facebook.