Jenelle (our "Princess Boo") turned two last Friday. I can't believe its been two years! To celebrate, we started the day at Goofy's Kitchen at Disneyland for the character breakfast. We were seated in a dark corner booth, which originally had me a little upset, but then I realized it was perfect for Jenelle as she sees better in the dark anyway! Jenelle was seated in her new wheelchair when Goofy stopped by. He pointed to Jenelle and made a gesture like "what's wrong?" so we told him all about her. He was very good and went up to her very slowly and tried to interact with her by tickling her face softy. It was awesome! I think because his face was black and white, she could really see him. Brett's Aunt Nicki told her "Jenelle, It's Goofy!", and Jenelle said "Goo" in response! Not sure if it was on purpose, but it was certainly the right sound! I was so impressed with the characters and their attention to Jenelle - Disney has really trained their employees well!

Later during breakfast, Cinderella came to wish her Happy Birthday. Jenelle could not keep her eyes off Cinderella (who was in a very sparkly dress) and hopefully I have an awesome photo of the two looking at each other (I hope it came out!) Jenelle made lots of noises for her too, and really seemed to be stimulated by the whole thing! It was a wonderful start to the day. We then went to Disneyland where big brother Jack rode the Haunted Mansion twice! All in all, both kids really enjoyed the day, and we hopefully got some really great photos!

On Saturday, we had a "Princess Party" for Jenelle at the house that included a "Princess Club House" bounce house. Jack was thrilled and could not stop talking about the "presents, balloons, silly hats and goodie bags" (something he got from a Dora the Explorer episode!) When we sang Happy Birthday, Jenelle seemed to know it was all about her and raised her eye brows in response to "Happy Birthday Dear Jenelle." I purchased a special "Birthday Princess" party dress for her to wear that had feathers on the bottom and shoulders. She seemed a little upset by the feathers, so she didn't wear the outfit for very long. A fun time was had by all - I'm attaching some photos of Jenelle in her special dress!

Unfortunately, during this past week we have really noticed a significant increase in Jenelle's seizures. In fact, during the party, Jenelle had 3 very long myoclonic seizures, one on top of the other, both lasting about 3 minutes or more. I am usually fairly comfortable with her "daily" myoclonics, but this had me wondering if we needed to use Diastat, so I called the on-call Neurologist that night. He suggested we watch it carefully and use Diastat if she were to have 9 or more "clusters" (3 or more seizures) in an hour. All day Sunday and again this morning, Jenelle still had many more seizures - this really started to worry me. I put in a call today to UCLA and spoke to Dr. Shields just now. He said that sometimes an increase of Lamictal can cause an increase in seizures as well. He instructed me to decrease Jenelle's Lamictal immediately (no weaning) by half, and maintain this dose for another two weeks, then give him an update. It may be that Lamictal is not the right drug for Jenelle after all. I'm really disappointed because I was so happy with her overall development and alertness on this drug. But obviously, if it is not stopping her seizures, there is no reason to continue it if is isn't effective at a lower dose. I really hope it is just a side effect of the drug, and not some new development.

Jack and Jenelle both received flu shots a week ago. While at Dr. Patel's we discussed Jenelle's status, and I requested a referral to Dr. Haas at UC San Diego. Dr. Patel agreed it was probably a good idea to check out metabolic and/or mitochondrial disease (the later of which we have not tested at all) in addition to seeking authorization for the Ketogenic Diet. It is my understanding from other parents in the area that Dr. Haas is the leading metabolic and mitochondrial specialist in the area, if not in the nation. His office does not have an appointment available until January 2005, but they were willing to review a copy of Jenelle's records prior to an appointment, once we got authorization approval from our HMO of course… alas… more hoops to jump through! Tomorrow is Jenelle's 2 year check up, so hopefully I'll get an update on our HMO authorization requests.

Oh yes ... I mustn't forget to let everyone know… Jack finally reached 30 potty stickers! Saturday night after the party, Nana, Poppa George, Jack, Jenelle and I went to the pet store and purchased a fish aquarium, along with 4 fish. Jack named them "Nemo, Sebastian, Mickey (because the fish actually has Mickey Mouse on its tail!) and Minnie (for lack of better name!)" He is so very proud of himself and is really enjoying his new pets.

Thank you all for the continued prayers for Jenelle. I will continue to keep you posted on the Lamictal decrease - hopefully something will work soon - this poor girl could really use a break in seizures!

Jenelle gets her wheels!

Jenelle got her wheelchair/stroller Wednesday morning. This thing is awesome - turns on a dime! It really is more like a "wheelchair" in that it also has a tray that can be used for feeding and/or playtime, but also like a stroller because it can be collapsed. Took me a while to figure out how to fold and unfold it, and its heavy, but no more than the double jogger stroller we got as a hand me down from our neighbors. I've decided I need a new car! This thing barely fits into the trunk of my Honda Accord - Brett thinks I'm nuts. He thinks Jenelle's new wheelchair is no reason for us to go out an get a new car payment! Oh well, I guess a girl can dream, right! ;) And sadly enough, this girl wants a mini-van - God I'm getting old!

We met with Jenelle's blind school Thursday to discuss the results of a recent development test she received. These meetings are never easy. It is hard to hear how she is doing so many new things, but yet she is still at the developmental level of a 3 to 6 month old. I decided a long time ago not to focus on these developmental "charts" and milestones. It is much easier to focus on what I see as improvement rather than the level where she is at. We should have our official meeting with regional center in the next month or so. As always, I want to increase her therapy, but we realize you cannot push her as one devastating seizure could set her back many, many months. I am hopeful for the progress she is showing, and am sure that it will continue to improve.

So, what is she doing that is new you ask? Jenelle bit me the other day! Normally, I'd be upset because this is such an issue with Jack, but for Jenelle, it was such a wonderful thing to see. I was lifting her out of the bath, and had her in an uncomfortable grasp - my arm was kind of digging into her rib cage. She of course was making noise that she wasn't comfortable, and then she bit me on the arm! I was so amazed, I carried her into Jack's room where Brett was reading him a bedtime story. I told Brett that Jenelle bit me, and then showed him her teeth marks - and Jack immediately yelled, "Mommy, Jenelle gets a time out!" Too funny. Also, the other morning, Brett noticed that while I was trying to seat Jenelle in her stander, she was repeatedly slapping and hitting me with her arm and fussy until I got her strapped in. Apparently, she didn't want to do that! Hopefully, these are good signs that she is starting to try to communicate her likes and dislikes. It is a wonderful thing to see!

Jenelle's 2nd birthday is next Friday - we are planning a day at Disneyland with a small party on Saturday. My, how times files but yet how busy these past two years have been. Jenelle is doing well with the dose increase of Lamictal - we are halfway there. She still has bouts of insomnia, but slowly she is sleeping longer. Unfortunately, Brett and I are not seeing much difference in her seizures. We'll just have to wait until we are at the full dose to make a better decision. And finally, we got the paperwork for Jenelle to apply to the Ketogenic Diet program at Huntington Memorial Hospital in Pasadena. In addition, I've decided that maybe we should first get an evaluation with a doctor I found in San Diego who is apparently "world renown" in Metabolic and Mitochondrial diseases. If Jenelle has a metabolic or mitochondrial problem, the Ketogenic Diet could be very dangerous, so it makes sense to do this first. Of course, we are jumping through the HMO referral hoops - so I'll just have to keep you posted.

Thank you all for the continued prayers and support. We greatly appreciate it.

Have you ever met a child that does not play with toys?

Before my daughter, I thought that children like this belonged only to poverty stricken families – families from third world countries who are amid dieses and famine. Families who could not afford food or the luxuries of toys. Surely, a child like this must come from a place like that – where they have never know the laughter and joy of playtime.

My daughter does not smile nor plays with toys. She never laughs. She cringes and cries when we attempt to place a stuffed animal in her hands. She prefers to be left alone, sucking her thumb. My daughter knows all too well the harshness of hospitals and emergency rooms – the touch of a needle poking her arm trying to find a vein for blood, or to administer medication. My daughter’s brain is “broken”, she suffers from seizures, and she is not normal.

Her only joy is to be held and cuddled, and even then I’m not sure that brings her joy. It does makes me feel better. It is very sad to think of a child that does not play with toys. It breaks my heart to see the toys in her room that daily go untouched. However, it opens my eyes to see her world a little differently. What must she be feeling or thinking? Is she happy?

Have you ever met a child that does not play with toys? Please meet my beautiful daughter Jenelle. 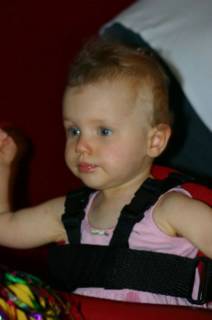 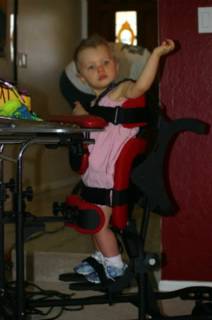