On Sunday we went Trick or Treating at Disneyland. The kids had a great time.


Here we have Buzz Lightyear & Jesse from Toy Story 2! 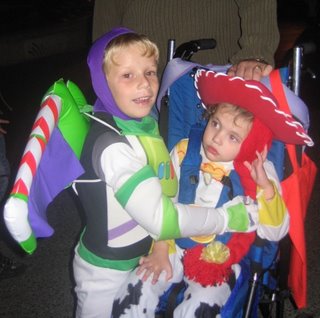 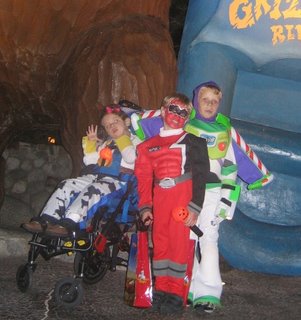 Jenelle and Jesse from Toy Story 2. 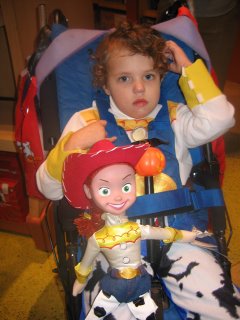 Jack with his new purchase - the "Big Woody" he's been wanting. He earned enough stickers on his behavior chart to get it, and paid with money from his Piggy Bank - $27 in quarters! He sleeps with it every night! 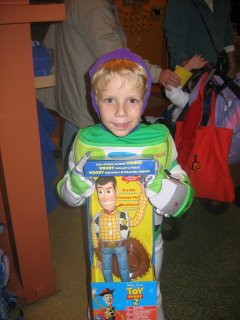 Have a Happy & Safe Halloween!
Posted by Kelly No comments:

Jenelle and her balloons!

Last night when I got home from work, I had promised Jack that we were going to "pop" Jenelle's balloons that were deflated and left over from her birthday party. However, when I got home, I found Jenelle playing with the balloons, rolling around in them, leaning on them - she even popped one but didn't cry! It was amazing - Brett said she had been like that for an hour at least. It was like she really enjoyed playing in them! I took some photos and a video. I didn't have the heart to pop them after witnessing her playing with them. It was so special. I hope you enjoy! 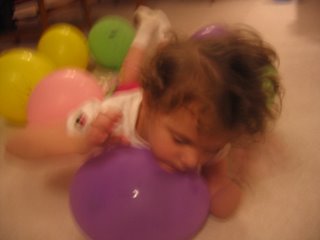 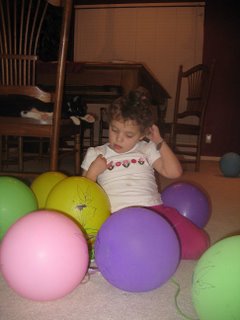 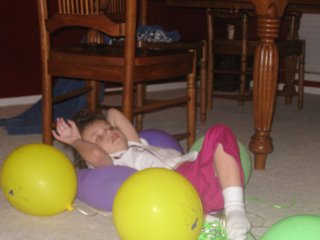 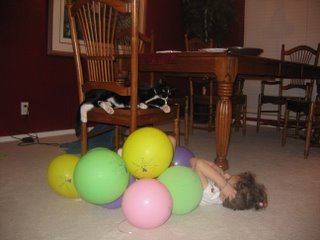 The update on our new 4 year old!

Jenelle was sick with a fever last Wednesday, and that turned out to be something "viral" so we didn't start Antibiotics. On Thursday evening she broke out in a rash that had us worried that we'd have to cancel her birthday, but as it turns out, the rash was not contagious and most likely a reaction to having our carpets cleaned earlier in the week. Thank goodness too as I was worried it was Fifth's Disease, which is very contagious! When we saw the doctor on Friday for the rash, she had a double ear infection so we started anti-biotics and she's been doing well ever since! Jenelle is weighing 36 1/2 pounds (that is a 4 pound increase since our last appointment with her GI doctor in September) and she is 39 1/2 inches long. Believe me, I can feel every one of those extra pounds when lifting her! Ugh!

We had a small party with family and close friends on Sunday for Jenelle and she really seemed to enjoy everyone. It is nice when people who haven't seen her for a while tell you all the different ways she has improved. Jenelle is "getting around" on her own these days, but it isn't what you would call crawling. Her personality is showing now and she is quite a people person. Last week we met with her Regional Center social worker, and Jenelle made it all the way across the room to put her chin on the social worker's knee. It was definitely a first, and a very good sign that she is becoming more social.

Big Brother Jack is enjoying school and loves Kindergarten. Today starts "Red Ribbon Week" where the kids are learning "Just say NO" to drugs. While waiting in car line this morning there was a big red ribbon around the tree outside so Jack asked me what Red Ribbon week was for, and I told him. He then said, "But Mommy, Jenelle takes drugs!" So I had to explain that when used properly, drugs were good and they keep Jenelle from having seizures, but that it isn't good to use drugs when they aren't needed. I think he got the idea, and hope he doesn't tell his teacher he has a druggie for a sister! That would not be fun!

We can only expect things to improve! Thanks again for the continued prayers and positive thoughts - they are working! I'll keep you posted!
Posted by Kelly 1 comment:

Today is Jenelle's 4th birthday. It's strange to think that our girl is 4 years old. Part of it feels like 40 years ago, some of it like yesterday. She is not the "baby" she used to be, and yet she is still delayed and not quite a little girl.

This is Jenelle's 1st photo after her early entrance into the world. So tiny, so white. I look at my self in this photo, and I think there was a part of me, perhaps a "mommy" instinct deep down inside that knew this child was different. I like to look back on these days as days of bliss when we still didn't know anything to be wrong, but I remember and think in my heart that I knew it was different even then. 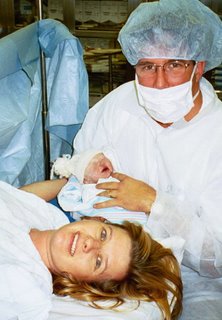 Here we are about to leave the hospital. I remember wrapping her up just before this photo and thinking she is simply beautiful. When Jack was a baby, I thought he looked like a little old man. Nothing cute about him, but of course no Mom says that. But with Jenelle, she was just a beautiful (and a little jaundice) baby. 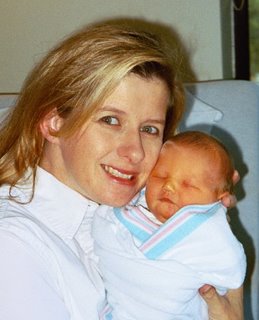 Jack was so young when Jenelle arrived - only 22 months old. I really don't think he had a concept of what it meant to have a new baby in the house. He was happy of course. But I don't think he ever really got it. 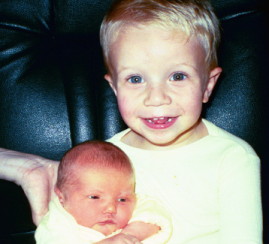 This was the photo we used for her birth announcement. 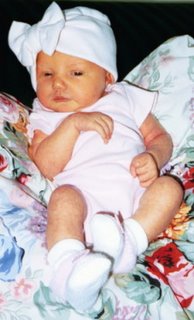 And of course, around 10 months of age Jenelle was diagnosed with Epilepsy. Our lives changed and she has overcome so much. Today we had a small party with family, and Jenelle seemed to enjoy it. We have a 4 year old in the house! 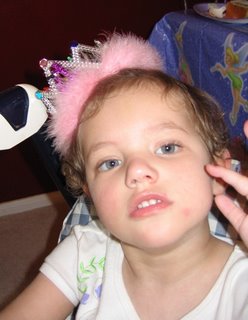 My talented Sister in Law snapped this photo of us at the Pumpkin Patch this weekend. Jenelle is constantly in motion, so she makes for a challenging photo subject. But catching that one "nano-second" in time... priceless! 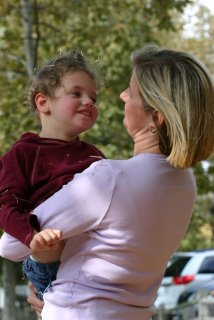 Here are some more photos from the pumpkin patch. I took the one of Jack. We let Jenelle roll around in a hay pile... And she loved it! 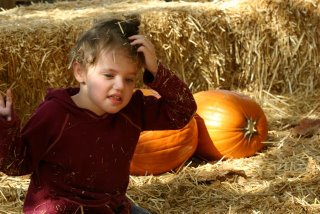 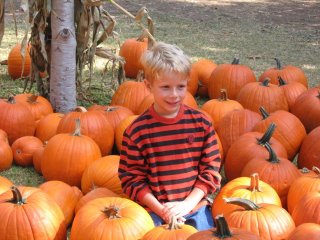 Just one more photo to share from the CHOC Walk. A co-worker emailed this to me today. It almost looks like Jenelle is waving too! (click on the photo for a larger version.) 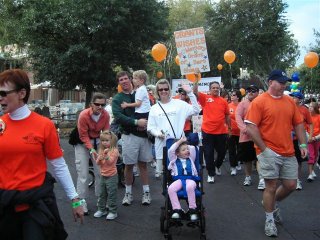 And for those that loved the last photo of Jenelle on the tram, just thought you'd get a kick to know that she was giggling the whole time!
Posted by Kelly 1 comment:

The entire family woke at 5:00 a.m. on Sunday to participate in the Annual CHOC Walk at Disneyland to help raise funds for the local Children's Hospital. Jenelle has been a patient at CHOC 9 times in her short life, and we are very fortunate to have such wonderful facilities so close to home. My firm sponsored a team of walkers this year, so we participated with them.

Here we are somewhere near the Jungle Cruise: 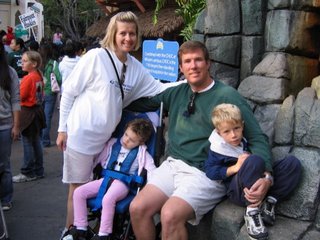 Jack really enjoyed seeing the characters along the way, but was kinda bummed the rides were not open. Here he is waving to Jesse and Woody: 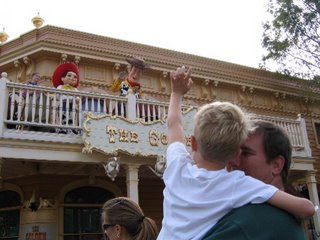 Jenelle's favorite part of the walk was the tram ride back to the parking garage: 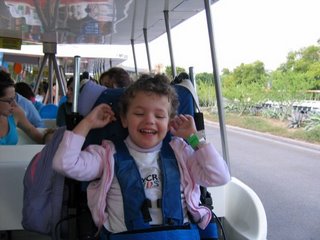 A lot of teams went all out with colors and balloons. It was quite moving to see so many that were "In Memory Of" a child that had died. Along the walk, they had signs posting interesting facts about Children's Hospital. The fact that moved me the most was that the number of patients at CHOC has increased 90% since 1998. That's barely 10 years. What is happening to our children?

We were very excited to finally participate in the annual CHOC Walk. Jenelle has either been a patient in the hospital, or very ill during the last three walks. She is doing so well right now, we had to take this opportunity to participate! When we finally got home, the whole family napped for 3 hours, and we were pretty exhausted the rest of the day! It was all for a very worthy cause.
Posted by Kelly 1 comment:

Just a quick update since its been a while. I got a note from Jenelle's PT last week informing me that "Jenelle took independent steps down the hall in the gait walker without assistance". For those who aren't up with the "physical therapy speak", this means Jenelle took steps all by herself in the walker! I think she may be walking within a year! I have yet to see her do this on my own but will welcome the day. At home we've noticed Jenelle trying to walk on her knees. She is so determined, and strong!

The weaning schedule is going well from Jenelle's pump feedings at night. After the first few days, Jenelle started waking up earlier than normal because she was hungry, but now she seems to be back on track with her sleep. In case you were wondering, we are not decreasing Jenelle's formula intake with the wean, we are just giving her more ounces during the day so that she can get all of her feedings during the day instead of supplementing with the pump at night. A friend was worried that we were "starving" her and that is simply not the case. We are trying to adjust her eating to more appropriate times, and to keep her interested in trying to eat table food again.

It's hard to believe but in 20 days, our girl will be 4 years old! Now that we have seizure control, I have no doubt that she will continue to improve and develop in her own way. Thank you for your continued prayers - I'll keep you posted!
Posted by Kelly 6 comments: