Some photos of summer

Summer began with Jack's Little League Team, the AAA Cardinals, winning District 30 Tournament of champions! We shared a special moment with Grandpa as he got to hand out the banner to Brett, JD and their team. 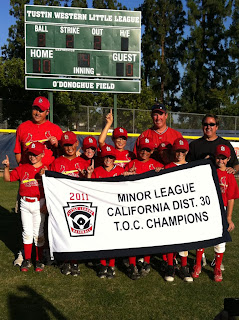 A few days later, Jack had the best moment of his life: He threw out the first pitch at the Angels game. We gave him the brick below as a special gift to remember the day. The brick will be laid in front of Angels Stadium as a part of their Brick Project for charity. It was an extra special day as cousin Trevor was honorary bat boy as well. 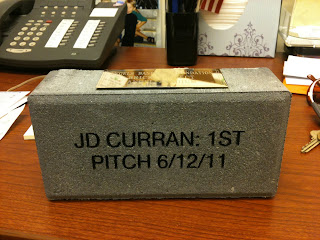 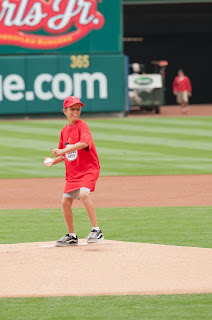 Shortly after 4th of July, Jack and I took a solo road trip to see Nana and Poppa George, as well as Aunt Onie, Aunt Norma and cousins Matt and Eric. JD enjoyed swimming with his older cousins, and going to Poppa George's concert in the park in Kingsburg. 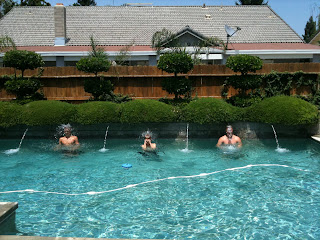 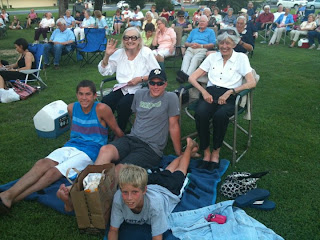 A few days later, Jack went to his first ever sleep away camp. Here he is at Forest Home with his friends Garret and Grant. They had a blast. 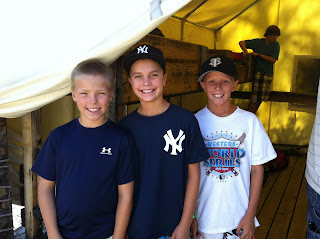 Jenelle is enjoying her new summer camp as well, including their field trip to Knotts Berry Farm. 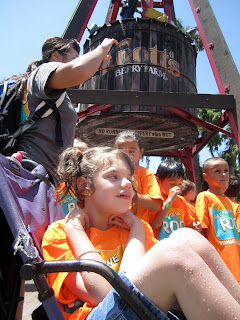 In late July, District 30 was host to a Little League Travel Ball team from Victoria, Australia. Our travel team from Tustin Eastern got to play the Kangaroos in a friendship game. 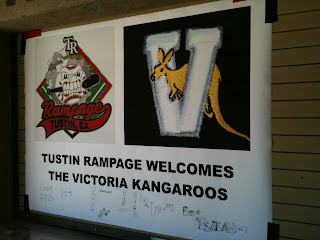 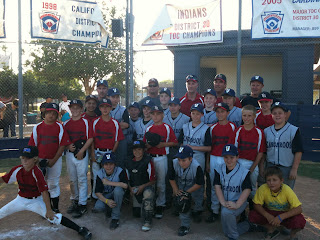 Here is a recent photo of Jenelle, taken by Aunt Debbie. She is such a young lady now, as opposed to a baby girl. Her beauty amazes me. 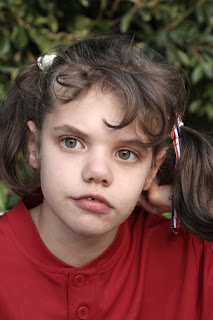 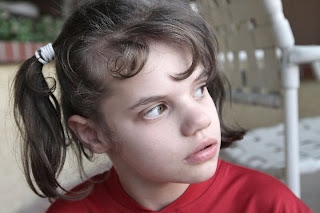 And Brett and I finally got to see U2 in concert at Anaheim Stadium. Brett got me the tickets two years ago, but the concert had been postponed due to Bono's (the lead singer) back injury. The concert was amazing. 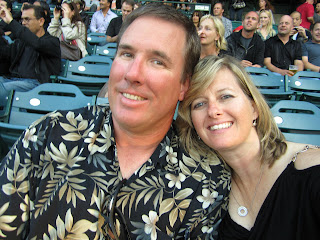 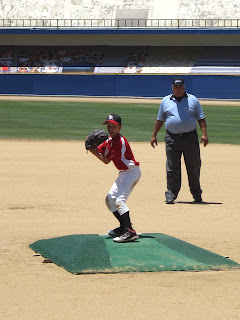 Summer has flown by, and I have more photos to share when I get a chance.

Summer is Flying By!

Well geez, it's been exactly one month since my last update. My apologies! We've had a pretty fantastic summer so far, and we've been very busy as well. Jack's travel ball team, the Tustin Rampage, played in a couple of tournaments in the month of July, including the USSSA World Series in West Covina - they came in 6th in the first round (out of 23 teams), but did not advance in the second. The Rampage also played in a Friendship game for District 30 Little League, and had the unique opportunity to play a travel ball team from Victoria Australia! It was a blast, and I had fun keeping score with two Aussies doing the announcing! We were laughing more off the microphone than we did when we were on it! Meanwhile, while the Rampage played travel ball tournaments, 4 of our players were on the Tustin Eastern Little League 9/10 Year Old All Star Team that recently won the Division 5 Championship (the Southern California State Title!) Needless to say, there is a lot of talent at his age. I'll update more on JD's summer a little later with some great photos.


While driving back and forth to games, Jenelle started her new summer school program in which she had class from 8:00 to 11:50 each day. I was a little concerned at first because she came home with a "homework" packet the second day. Yes, actual homework with math, spelling, cut and paste and reading! I wasn't sure how to approach with her new teacher because I learned that it was the teacher's first teaching job. The idea of sending home a uniform homework packet with tasks that Jenelle clearly had no ability to accomplish was offensive at first. As Jack said, "Mom, that is college work to Jenelle!" I didn't turn in her homework, and heard nothing from her teacher in return.


Jenelle did really well at school after the first week or so. The YMCA program finally went into effect during her fourth week of summer school. Jenelle has two wonderful aides through the YMCA, and she has kept them on their toes. The second day, as I was getting in my car in Newport Beach I got a call from her aide, "Mrs. Curran? The little plastic thing in her tummy? Well, it fell out! What do we do?" Oops, Jenelle lost her mic-key button, and this was something we didn't cover! In fact, the YMCA didn't even have a spare. When I asked the aide if she knew how to replace it, she said no, so I told her to put a band aide over the stoma, and that I'd take care of it when I picked her up (and that I was on the way!) "A band aid? Is she in pain? Does it hurt her to have it out?" she asked. "No", I replied, "but if you don't put a band aid over the hole, stomach contents will start to leak out!" Ewe! I got to Jenelle's school, and 10 minutes later replaced the mic-key button at home. No problem!

Later that first week, Jenelle had a different aide who unfortunately got to experience her grand mal seizure. Like I said, Jenelle really kept them on their toes, and the YMCA has handled everything beautifully. Once school ended at the end of July, Jenelle started full day with the YMCA summer camp, and has accompanied them on two field trips! One to the Discovery Science Center in Santa Ana, and one to Knott's Berry Farm. They plan to travel to the YMCA pool next week, but I think Jenelle will sit on the deck for that trip! Her aide told me today that once they started full days, Jenelle seemed agitated and tired easily, but now is used to the routine and fits in well. She also has an entourage of 8, 9 and 10 year old girls who look forward to playing with her each day. It's wonderful to see her finally have friends her age.

And finally, in addition to Pop Warner Football season starting on August 1 for Jack, Jenelle started cheer leading for the Tustin Cobras as well, on their new Challenger Cheer Team! The team consists of 6 girls of varying ages and abilities. They really love doing cheers and Jenelle loves to do it as well. In fact, this evening I was trying to remember the moves without Jenelle (I stand behind Jenelle and move her arms for her) and as I started the cheer, Jenelle smiled and walked in front of me as if she knew it was time to practice! I was never a cheerleader, but it seems to come natural to Jenelle. She loves to jump and smiles when we rattle the spirit stick. The practices have been more of a work out for me, but that is not necessarily a bad thing as I could use some exercise.

Seizure wise, Jenelle is still having days with prolonged seizures. The Vimpat is finally up to the therapeutic dose, and we'll start the Banzel wean next week. Unfortunately, our next appointment with Dr. Shields is in November. Unless we hear about the VNS sooner. And three more weeks until school starts for both Jack and Jenelle. We'll have a big 5th grader, and a 3rd grader. Come September, we'll be back into our fall routine and looking forward to the holidays. Like I said, summer has gone by fast, but it has been filled with fun and we've enjoyed every minute. Thanks for the thoughts and prayers - pictures to come SOON - I promise! :)