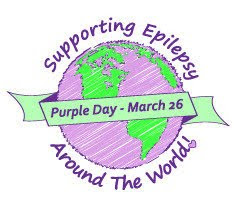 Last week, I was taking a nap on the couch when Brett got home with the kids. Jack walked up to me and the first thing he said is, "Mommy, are you sick?" Jack asking if I was sick was something he did a year ago while I was going through chemo. If the answer was "yes", he would often play outside, or I would move to the bedroom. He seemed happy to hear that I had just been sleeping, catching up on much needed rest. Life has been busy for us, but I am cautious to take naps when I can.

With our life getting back to some form of normal these days, Jack asking if I was sick was just another reminder that our life is not exactly normal. In moments like this I can't help but think of the strong adult that he will become.

Jenelle has been great these days. Her eating continues to improve, and just last Saturday we shared our first McDonald's cheeseburgers together. After thinking about it, I couldn't remember the last time I had eaten at McDonald's. I then realized the only reason I didn't eat there before was because their menu offered little for Jenelle to eat. Now that she has mastered chewing, she did beautifully with the cheeseburger as I fed it to her in small break off bites.

My Mom will be excited to hear this next bit... I think Jenelle has a new sound. "Na Na Na Na Na" She started saying it last Saturday. The grand kids call my Mom "Nana", and even though it was just a sound, it does sound close to the real name. Brett however will disappointed if Jenelle doesn't start saying "Daddy" soon. It is all he has ever wanted to hear. Jenelle has been much more vocal recently, discovering new sounds and such. It is so exciting to watch and wonder what she will say next.

It has been some time since my last hair photo - December I think? Well, my hair is now to the point where I need to make an important decision - bangs or no bangs. I think I've already made up my mind, but I would love to hear some opinions. My hair is long enough to blow into my eyes now, and it touches my shoulders. When people see me now, they don't even realize my hair was never this short. It's still curly, and that is still taking some getting used to. Anyway, here are the photos - let me know what you think. 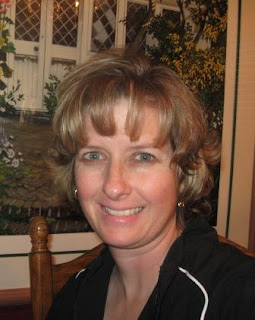 Without bangs: (and with a hair clip to boot!) 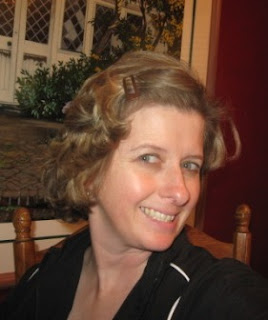 And here are some more photos for you to enjoy. A few weeks back, our home was "flocked" with a rare sighting of flamingos! The gag was courtesy of the Foothill High School Cheer team as a fundraiser to help them purchase a mascot costume. Jack and Jenelle sure did enjoy seeing the pink birds all over our lawn. Brett and I enjoyed returning the favor to some friends! Better than someone toilet papering our house I suppose. 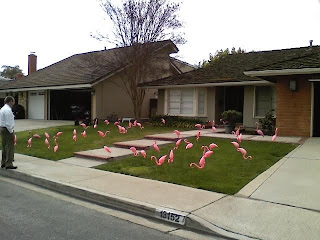 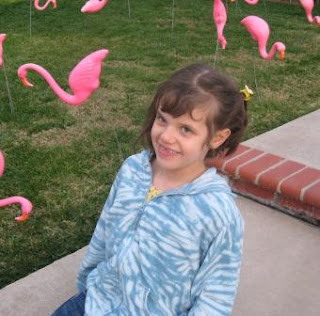 And Jack finally got out of line one too many times. 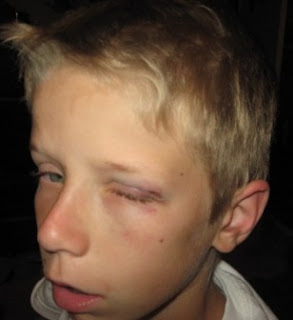 NO - He actually did this to himself while jumping on a friend's trampoline. It looked pretty bad for a few days. We told Jack black eyes were "cool"! 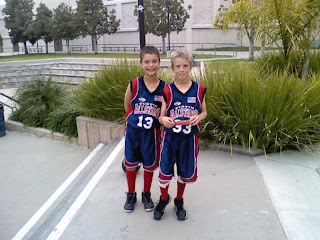 And finally, Jack's NJB All Star basketball season is coming to an end this weekend, which will thankfully give him more time to enjoy baseball. This past weekend we had 3 baseball games and 3 basketball games. Above is Jack and his friend who is on both his basketball team and baseball team. After their baseball game on Sunday, they had to rush to their last basketball game. In the process, they were so rushed, they forgot to change their socks! Jack said they were their "magic socks". It almost helped them too - they lost by 1 point that game (after losing miserably earlier in the weekend.)

That is all for now. Thank you for continued thoughts and prayers.

It's been very busy at our home in the last few weeks - thankfully, we are all doing well. Little League has started again - Jenelle is in her 3rd year of Challenger Baseball and is walking the bases with ease. Jack is in AA Division, also known as the first year of kid pitch. Brett is the manager for Jack's team, and the "pitcher" for Jenelle's team. On top of baseball, Jack was voted by his teammates to the NJB All Stars. After Saturday baseball, we have Sundays filled with basketball. Like I said, we're busy, but it's been fun.

I had another follow up last week and things are still going well and cancer free for me. I am always amazed at what they can tell from my blood work. I mentioned having a runny nose to the nurse, and then because of my low red and white blood cells, the doctor put me on a Z-pak and determined I was getting a sinus infection. I just finished the ATRA regimen and am glad to get rid of the itchy skin. Of course, being on 3 chemo meds could have caused my getting a sinus infection. At least my doctor is on top of it all. I go back again next month.

That is all for now. Thanks for the continued thoughts and prayers.
Posted by Kelly 1 comment: