Being that it is already the end of February, I guess it's too late to make a New Year's Resolution to update more often! ;)

Since the last update (September?) Jenelle had been doing very well seizure wise, and actually ended her food strike and started eating by mouth again! Things were going really well seizure wise until we had her home for Winter Break.

Prior to the Break, we were seeing one or two seizures every third day.  Yes, you read that correctly... every. third. day!  She was doing fantastic - making new sounds, showing interest in things and excitement.  Ah, the wonderful life of seizure control!  But as it does with kids - they grow and things change.

Around the holidays, we noticed that Jenelle's seizures were increasing with a new type of seizure.  This new seizure was quick, and only lasted a few seconds. Jenelle would be sitting (or standing) and her arms would jolt out straight and she would drop.  Sometimes so violently she would throw herself out of a chair! Sometimes we activated her Vagus Nerve Stimulator ("VNS"), and sometimes the seizure was so quick, we couldn't swipe the magnet in time.  This continued into January until we started seeing about 10 to 15 of these new seizures a day.

In early January, Jenelle had a physical and we found that she had gained 25 pounds! YAY!  Once I realized that, I put in a call to our Neurologist to break the news about the lack of seizure control that we were seeing with the new seizure presentation.  In general, the doctor and I suspected we needed to increase her medication, however before making changes blindly, our neurologist recommended a quick overnight Video EEG to confirm the type of seizure we were seeing.  We were admitted last Thursday to CHOC at Mission due to a cancellation, and Jenelle was hooked up to a Video EEG very quickly.  This quick EEG ended up providing very valuable information!

I had been describing the new seizure as a "jolt with a drop" - which made our neurologist suspect "Atonic Drop Seizures."  This would be new for Jenelle, and possible require a different seizure medication than the ones she was currently taking. However, while hooked up to the EEG, Jenelle had at least 10 of the seizures we were concerned about and per our neurologist, they were not "Atonic Drop Seizures" but rather "Tonic" seizures.

Most Lennox Gastaut patients often suffer from "Tonic" seizures. The last time this type of seizure was uncontrolled in Jenelle, her arms and body would get stiff, her lips would turn blue and they lasted almost a minute.  Most people are familiar with the "Grand Mal" seizure, which is now more commonly described as a "Tonic Clonic" seizure.  Well "Tonic" seizures are similar, but with out the convulsing.

The good news is that an increase of "Tonic" seizures means we need to increase Felbamate; which makes sense given her huge weight gain.  The ever BETTER news... the reason I didn't recognize these seizures as "Tonic" seizures is because Jenelle's VNS was working.  At the onset of a "Tonic" seizure, Jenelle's heart rate would spike and trigger the VNS to activate on its own to short circuit the "Tonic" seizure.  So, instead of the seizure going almost a minute as it did in the past (and sometimes with out oxygen), the VNS has stopped the seizure within 10 seconds.  AMAZING HUH?  Next to the G-Tube, the VNS is the best decision we ever made!

Jenelle went home the next day with a new plan to increase her Felbamate and tweak some of her other medications.  After 3 days increasing to the new dose, she is having less seizures.  She is happy... we are happy ... and I feel like we won the latest round only to fight the seizure monster again another day!

Here is a photo from our brief hospital stay (love those Snap Chat filters, even if I don't know how to use Snap Chat!) 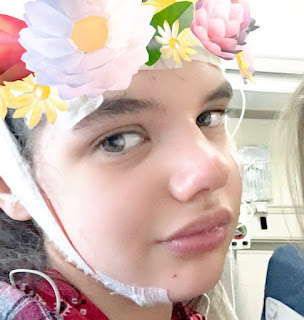