PLEASE READ: If you have made your way to this website via "Michael Jackson Death Hoax" dot com, please know that the administrator at that website has used this post to support incorrect information. The fire alarm that is discussed below was for the 200 Medical Center Building in the Peter Morton Center. This building is next door to the Ronald Reagan UCLA Medical Center Hospital where Michael Jackson did in fact die on June 25, 2009. The hospital did not have a fire drill, nor was it ever evacuated during the time that the Jackson family was there. It was later determined that the fire alarm at the 200 building was pulled by a paparazzi to create a distraction so he/she could sneak into the hospital. I have tried to find a contact or an e-mail for the administrator at the Michael Jackson Death Hoax website but conveniently for him or her, one cannot be found. If the administrator reads this, please correct your post and remove your link to this website. If you don't, I will make a formal complaint to Wordpress about your site.

Today I had another follow up appointment with my oncologist at UCLA, and while there, Brett and I got caught in the middle of the Michael Jackson media frenzy regarding his death in the building next to the one we were in. What a sad loss at only age 50.

The day started routine, I arrived a little late for my 12:30 blood draw. Because the results take an hour, Brett and I walked into Westwood to Chili's for lunch. This was a good 3 block walk for me and I'm getting stronger. Apparently, while eating at Chili's, Michael Jackson, the King of Pop, was brought to UCLA Medical Center by ambulance in Cardiac Arrest around 1:00. As we walked back to my 1:30 appointment, Brett and I noticed a helicopter that was hovering the hospital and seemed out of of place since it wasn't landing. Once we got in and into our waiting room for my doctor, we jumped onto WiFi to read in the news what was going on. We couldn't believe we were right there. As we waited, we heard the news of Michael Jackson's death via Twitter. The helicopter sounds grew, and we were curious what was building outside. The nurses weren't really confirming anything, but it was obvious some were in the know.

After waiting almost two hours (my oncologist was fitting me in) we finally got to the exam with my doctor. My rash is healing, and the pain I am feeling and describing is my entire body growing a new layer of skin. She said two more weeks and I should be through the worst of it. She was very pleased with how I was healing, and my White Blood Cell counts, Hemoglobin and Platelets couldn't be more normal - I could donate platelets now if they'd let me! And then as we were about to get to some bigger questions, a fire alarm went off. We had to evacuate the building with the doctors and nurses and stand outside as the media frenzy was growing regarding Michael Jackson. I think a Paparazzi probably pulled the alarm as a distraction. Still, we had to wait for the fire truck and the all clear, within yards of the entrance to the hospital where Michael Jackson was.

In fact, after the little fire alarm, we found out that one of the nurses (the one who takes my vitals) was approached by a young black man as we were waiting for the all clear. He told her his name was Jermaine Jackson, Jr. and he needed help finding the entrance to the hospital, so she escorted him. She was just a few feet away, and we missed it! Once we got the "all clear", we went back in to finish my appointment. At that point, a lot of the nursing staff was confirming that Michael Jackson had indeed passed away. Not sure if we knew ahead of everyone else, but it was still shocking news to say the least. The good news about the rest of my appointment: I am still cancer free, and I no longer need to have blood draws at home! Yay!

Once our appointment was done, it was around 4:30, and Brett and I started to leave, hearing that streets had been closed and we may run into problems. When we got outside, we couldn't believe the change. Seven satellite TV trucks lined up and thousands of people with flowers, signs, etc. We decided that since we were thrust into the middle of it, we may as well get a couple of cell phone photos. It was amazing, it was almost like within an hour, thousands of people were there at the hospital. Here are the two photos I managed to take on my cell phone: 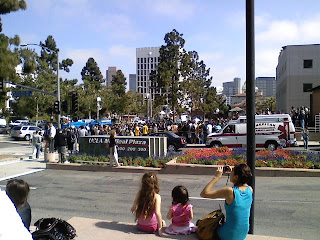 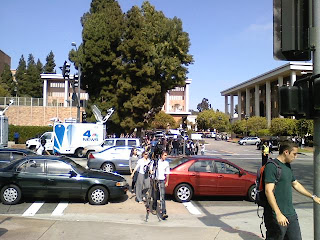 And of course, we had some more drama. As we tried to cross the street to take photos, I tripped over my flip flop and skinned up my arm and leg. It happened right in front of two paramedics and they did nothing. They must have thought I was some Michael Jackson fanatic. Brett was hoping to get interviewed so he could say, "Michael who?" He has such a sense of humor! We went back to oncology where they patched me up, and then we were finally on the way home.

We made it out of the parking the "back way" on Gayley very easily and hit some traffic on the way home. It was a long, strange day. But lots of good news amongst the sad news in Hollywood with Farrah and Michael. I hope they rest in peace.

My next appointment is in two weeks - I'll keep you posted! KCA!
Posted by Kelly

You so RAWK at KCA!!! I love the words "cancer free". Sorry that you skinned your knee, and shame on those paramedics for not helping you!

LOL.. at Brett - now he would have made headline news! Michael who? cracks me up.

Here's to not having weekley blood draws at home, and being Cancer Free - awesome awesome news!

Oh CONGRATULATIONS on KCA! What a crazy strange and exciting day for you indeed to get this great news. I guess you'll always remember the day you were told you were cancer free and when MJ unexpectedly pass as well as Farah. May God give you many wonderful blessings for a full and exciting life to come.

Cancer-free is the BEST part of all of that.

This was the best update ever. Hooray.

Kelly-Best news ever! Keep KCA! I'm praying for you daily!

I bet it was crazy at the hospital. Can't even imagine.

Michael and Farah were a huge part of my growing up. RIP FF & MJ!

The paramedics? Due to wonder PI attorneys they can't treat unless you ask. My hopefully future son-in-law is a paramedic. He won't treat but he won't ignore. He will at least ask if you'd like treatment.

CRAZY day...What an experience! Congrats on the "cancer-free" update...and glad to hear that awful rash is healing! We are so happy for you and the family. YEAH!! (You're still in our thoughts and prayers.)
The Brazzles

Yeah for being cancer free!!!!

That IS quite a story! Reminds me of the time my Dad and I pulled up to the medical center in Houston just as Howard Hughes was brought in (dead). Yes, I.am.old.

You are a great storyteller!

I left my congrats and advice for not skinning your knees on the post above. Barbara

Hello, it's a nice story. I wish you and your family all the best.:)
Sorry for my question: Fire Alarm was in Peter Morton center?

Michael who ? cracks me up.
LOL
You say that you saw Michael live after his death?
I belive than Michael is alive !!!
sorry for mistakes, I am of Polish.