Last week was a big week for our Jenelle as we celebrated her 6th Birthday. On the evening of her birthday, we celebrated with double chocolate cake after dinner. Jenelle really enjoyed that, and then experienced a sugar high beyond belief. Fortunately it was short lived and Jenelle didn't have a problem getting to sleep. remind me next year to avoid chocolate so close to bed time.

On Friday, Jenelle had her 6 year check up with Dr. Patel. Jenelle is now a whopping 50 pounds, and 48 inches tall. 80th percentile for weight and 50th percentile for height. The school nurse had told me that Jenelle is showing signs of Scoliosis, so Dr. Patel put in for some x-rays. We will have those done this Friday afternoon. Dr. Patel also put in a request for the endocrinologist regarding the precocious puberty issue, and warned me we could be looking at a 6 month wait as CHOC's endocrinologist are overwhelmed. Jenelle got 4 shots and is now finally caught up on her immunizations.

We had a very busy weekend this weekend and celebrated Jenelle's birthday at the Storyteller Cafe at Disney's Grand Californian. Jenelle usually loves looking around and the attention from the characters, but this time she was very cranky. We think it could have been because of her shots. Also this weekend, I finally got an opportunity to catch Jenelle vocalizing on video! She was in her room playing by herself as I was trying to catch a nap in the other room. All of a sudden, I could her her small voice talking to herself. I grabbed the video and tried to sneak up on her to catch it on video, but unfortunately stepped on a toy that made music. At the very beginning of the tape, you can hear her saying "la la la la la", but the she stops when she heard the toy, and then decided not to perform. The video is below.

Here are some wonderful photos from this past week. Jenelle and her chocolate sugar high with Daddy and Jack sharing on the fun, and a photo of the Welcoming ceremony. Also, the video below is one that is sure to warm your heart. Right at the beginning you will hear Jenelle's sweet angelic voice. Enjoy! 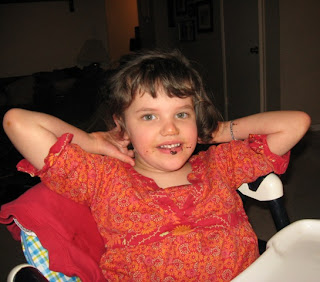 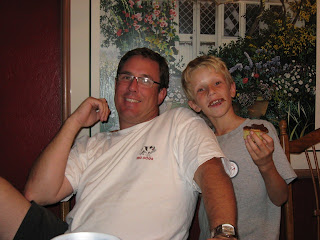 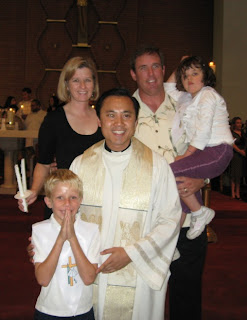 The family after the "Welcoming" ceremony with Father Bill.

My gosh Kelly, when she gets up and just walks over to you like it's no big deal it brings tears to my eyes. Your beautiful girl is such a miracle!

Awww. That is sweet.

We, too, have to wait to get into the endocrinologist's office. My son has to go quarterly for his CAH and you don't dare miss an appointment because it is a four-month wait here unless you're having a crisis of some sort. Even at that, we only see the doctor twice a year and see a nurse practitioner the other two times. Good luck with that. We've managed to fight off the precocious puberty with him. I hope you can, too.

and, she is a big girl! My baby who turned 6 is a tiny little thing at only 32 pounds still!