I never felt so helpless in my life. The first one was three minutes long. The next almost 5 minutes. Then the next, only a short two minutes. After each one, she would look at me and scream, then cry until she had another. It was as if she was begging me to make them stop, and there was nothing I could do. I looked up at the doctor who was on the other side of the bed. We both had been watching the clock above; timing them. This had gone on for 20 minutes without a break. She was a young attending, and she looked uncomfortable and was biting her lip. She then looked at me and asked , "Well Mom, what do you want to do? Can she take another dose of Ativan?"

Twenty-five minutes earlier, I had called Brett (who was getting food) to tell him that it looked like they were going to send her home! And next thing I know, her seizures were out of control and instead of going home, we were in the tunnel that leads from the emergency room in the main hospital to the children's hospital across the street. It took two more doses of Ativan to stop the seizures and knock her out for the night. She was on oxygen and there was a crash cart at the end of her bed as we transported her. We were escorted by the doctor and three ER nurses to the Pediatric Intensive Care Unit (PICU), where we stayed for 5 days.

This was the first time I realized that she could die from a seizure. I felt so helpless. We've come a long way in this past year. What a difference a year makes! 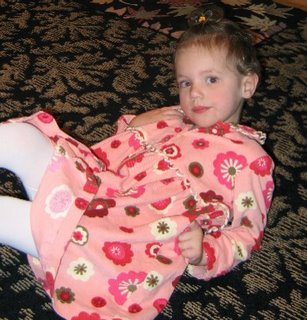 I drafted the post above 10 days ago, because I've been anxiously waiting for this day to come... And pass. It is such a weird thing, I remember the exact date and time of each and every one of Jenelle's hospital admissions. This was the worst point of last year. The next date we need to pass is June 21. After that day, it will have been a year since Jenelle was last hospitalized. Knock on wood!

Just a reminder... The 2006 Epilepsy Freedom Walk is coming June 3, and we are walking as "Jenelle's Avocados" to help raise funds. 100% of the funds raised at this walk will go directly to services that benefit families like ours in Orange County, including a free advocate to work with Jenelle's school, free seminars, free therapy sessions, and free education regarding new treatments in Epilepsy. Please help us with your donation if you can - click on the button above to access our team website and make a donation.

Thank you!
Posted by Kelly

Beautiful picture of Jenelle. You need a frame for that one!!!

dearest,i too am the mother of a special child.nobody knows what i go thru.
i understand.
love